Everything was beautiful and nothing hurt. 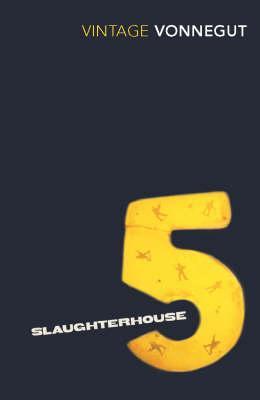 There is no doubt that Kurt Vonnegut is one of my favorite authors. He’s right up there with Erich Maria Remarque even though those two authors write in a completely different style. While Remarque gives you a heartbreaking and brutal yet beautiful account of the war times, Vonnegut will break your mind and twist the concept of how a book should/could be written. Remarque follows the tried and tested, Vonnegut throws the reader about the plot and events like a rag-doll. Remarque is more realistic by touching on deep humane connections and emotions, while Vonnegut does the same but with a touch of alien, sarcasm, ‘fill in the blanks yourself’ kind of way.

“- Why me?
– That is a very Earthling question to ask, Mr. Pilgrim. Why you? Why us for that matter? Why anything? Because this moment simply is. Have you ever seen bugs trapped in amber?
– Yes.
– Well, here we are, Mr. Pilgrim, trapped in the amber of this moment. There is no why.”

In Slaughterhouse 5 we follow Billy Pilgrim- prisoner of war, optometrist, time-traveller. As a reader you’ll jump from one year to another, then back again as Billy’s life events are all accounted for. You’ll be taken to past, future and present. You’ll be taken to space.

As always there are just so many wonderful quotes in Slaughterhouse 5. I wanted to take note of them all, but realized I may end up re-writing the whole book!

“She was a dull person, but a sensational invitation to make babies. Men looked at her and wanted to fill her up with babies right away.”

While Vonnegut’s writing can come across as madness, and you may get irritated at the lack of structure that you’re so used to, let go of that anal need to follow the protocol of literature and explore this fantastic book. It’ll be like a funfair where you’re excitedly moving from one attraction to another. It’ll be like a treasure hunt where you add together pieces and come to a grand prize. In this book’s case, the grand prize probably won’t be the ending. I found the ending so bloody anti-climactic. BUT… but at the same time so realistic, so real life, so human.

“You know — we’ve had to imagine the war here, and we have imagined that it was being fought by aging men like ourselves. We had forgotten that wars were fought by babies. When I saw those freshly shaved faces, it was a shock. “‘My God, my God — ‘ I said to myself, ‘It’s the Children’s Crusade.”

Wikipedia tells me that: The central event in Slaughterhouse 5  is Pilgrim surviving the Allies’ firebombing of Dresden as a prisoner-of-war. This was an event in Vonnegut’s own life, and the novel is considered semi-autobiographical.

If you’ve read any books which are written by the men of the WW2  period, you’ll know there are quite shocking, true to have happened, realistic scenes. As a modern day reader, and also one not personally affected by current war situation, your mind, while reading, may discount some of the phrases to be fiction. To be too graphic. Incomprehensible… Well, time to take off that dress and cancel that tea party because it’s mind blowing what human bodies have had to go through, experience, face… Read any accounts of Vietnam war… any war.. Agent Orange, mustard gas, the various explosives that are more evil and create more than just simply a ‘Boom’ and make bodies fly high up in the air…

“Billy coughed when the door was opened, and when he coughed he shit thin gruel. This was in accordance with the Third Law of Motion according to Sir Isaac Newton. This law tells us that for every action there is a reaction and opposite in direction.

Slaughterhouse 5 is considered satire… I think Vonnegut was Satire Incarnate… The Satire King… so, there are bits in the book that made me laugh. Out loud. But there were also parts that made me want to weep. Maybe I was reading too much into some of the lines, maybe I made it worse for myself… but that’s the beauty of a book- we all take away the message that we, individually and personally, want to take away.

14 thoughts on “Slaughterhouse 5 by Kurt Vonnegut”