Note: this review includes some bad language. Proceed at your own risk. 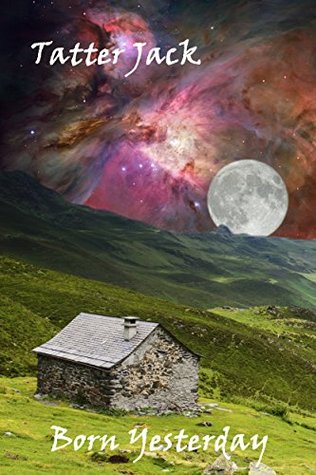 Look.
No, not here—down there.
See her? The woman behind the rock? The one with a Glock 43 in her hand? That’s Schae Summers, fantasy author. She only came to Scotland to do some book research. Not to be chased over the heather by a wolf. Because everybody knows there aren’t any wolves in Scotland, right?
Well right now Schae’s wishing someone had told the one behind her.
But being chased is one thing—even if it’s by a wolf. Being chaste? That’s something else entirely. Especially where men with storm grey eyes are concerned. Men like Darek Banakar—who just might be more dangerous than any wolf.
So here she is. Schae Summers. She’s smart, and she’s hip. She wasn’t born yesterday – but she’s going to be.

There’s Schae, a woman who doesn’t really know anything about her past. She wakes up in a hospital, without an single memory about her past life and has some wicked nightmares every night. She uses her nightly terrors to start writing books as a successful fantasy author and essentially builds herself as normal as possible a life. Her body is covered in scars and she has no clue where she got them from… until she does. In the hospital they told her she had had a child but she has no idea where that child now is…. until she does. dun-dun-duuunnn!

I said it already— I wasn’t born yesterday. I know there’s no such thing as magic. Thing is, apparently there are such things as wolves who aren’t always wolves, and guards who think butt-naked women are cats.

Schae ends up going to Scotland for research for her next book and ends up meeting Darek! The mostly man with storm grey eyes (yet otherwise not that pretty as Schae seems to think) lives in the Middle of Nowhere, Scotland in a cottage and he blushes. Awww… So what do I mean when I say mostly man? Ha! This is part of the mystery with this book… I was kept guessing until the end… a vampire? a werewolf? an angel? Evil? Good? Psycho?

Darek is a bit of a mystery, as I said, as he acts a total gentleman throughout the book except when he’s… doing something… with a knife. The dialogue by him comes with a warning from me: it gets frustrating because he’s so secretive! Until the very end!

Then there’s Katya… a wolf who is girl, or a girl who is wolf. Always naked, always sporting a one track mind which alternates in between rabbits and pretty girls. She also thinks human words are so empty. Empty! But she knows how to appreciate when she sees a pretty woman and she can kick ass.

The Moon… peeps! The Mooooon gets a little role in this book as well! A talking witty moon. Plus some weird branch like being who can blow doors open? ‘Nuff said!

So woman meets man. Weird things happen, lots of chemistry happens, nightmares are really not nightmares anymore and a there’s a man on a mission determined to eliminate Darek. A story within story within story, Schae ends up discovering who she really is, what her past has always been and what her future is going to look like. Will she do as is foreseen or will she refuse to give up without a fight?

The ending wraps everything up nicely, all the questions that went unanswered for most of the story get answers and there actually truly is a proper plot and story, even though I can’t tell you any much more because that would ruin it for you should you want to read Born Yesterday. I love how the focus around being born yesterday eventually becomes a centrepoint to the plot and the author used it wisely. It’s not often when a book’s title gives you a hint and the conclusion all in one.

For me it was a fun, fast paced, mysterious and untraditional read. I think it definitely cannot be categorized under the ‘follow the protocol’ kind of novel. After all Born Yesterday is packaged in fantasy with a touch of humor and romance with a firm touch of touching in the mix which came with its own surprising element… which means…

Let’s talk about sex! When I said ‘a touch of touching’ I meant there’s some serious ‘ants in pants’ motions in between Schae and Darek. One would wonder- are they long lost lovers trying to get to each other through time-rifts and across dimensions. It was cute…

It’s quiet now. I don’t know why I like to watch you, afterwards. To watch you sleeping. But I do. And this is after, and before was what it always is— a wonder and, somehow, a delightful terror. A great, breaking wave and you make me into the whole sky and a single flying leaf at the same time. But that was then and this is now. And now? Now it’s quiet, and I watch you sleep.

Isn’t that a lovely quote? It is, I think. There was quite a few examples of this kind of writing in Born Yesterday and I really felt those quotes in that cold space where my heart should be. It was for that reason, those pretty thoughts and written lines that when words like ‘cunt’ and ‘cock’ were used I was like- awh, shit! 😀 I don’t mind when people are having at it but the use of those words in this case simply came like a bucket of cold water because I just freaking didn’t expect it at all. Not at all. I thought the story got tainted! But if there’s one thing I don’t mind while reading book, then it is to be surprised. Now, don’t get me wrong, Born Yesterday isn’t full of profanity nor is it a full blown fantasy/erotica. There are about 2-3 sex scenes and yet there’s more of ‘dancing around the issue’ and focus on the plot than the usually dreaded erotica would deliver. And after pondering over the book for a day or two I now accept that this is just that kind of book and I don’t really mind and “stop being a word-Nazi, Liis”. After all… isn’t ‘cunt’ the one word I call every piece of equipment that refuses to work for me at home? Yes, yes it is!

Anyway, moving on… I wanted to share an excerpt of an interview from TatterJack’s website on writing erotica. I think the “you can’t write erotica- only read it” gave me quite a bit of food for thought. As most of my followers would know I’m not a huge fan of erotica. It’s dry and emotionless and selfish. Unless the genre of erotica is broken and comes with “a story, a social commentary, a plot”.

Q: Er – say what? It says right there on your front page that you…

A: Yes. I know. I’m sorry. That’s the Great Sin of Marketing(tm). You sort of have to get certain words in, and ‘erotica’ is one of them. But really, I don’t think you can. Or rather, I don’t think I can. Write erotica, I mean. To me, erotica’s a bit like humour. Just because it’s got hard nipples in doesn’t make it erotic. After all, it might just be a description of Michelangelo’s David. And like humour, one guy’s Mary is another girl’s Jane. So words that make one person hot, to someone else can be just tab A in Slot B (yes, Jones Minor. I can see you sniggering at the back. See  me after class.) So for me, you can’t write erotica – only read it.

Q: So, without being funny, erotica is like humour?

A: Oh, I hope it can be funny. Or at least amusing. After all, when you think about it, pretty much all of sex is pretty damn ridiculous. And that’s sort of what I want you to do. When you read things Tatters has written, I mean. Think about sex. Laughter? That’s a bone… ahem. I mean, a bonus

I ended up swapping a few emails with TatterJack himself which was quite interesting and I ended up requesting more information… This is what I got back from him:

So. Lady Liz very kindly asked me if I’d like to write a follow-up post to her review of BORN YESTERDAY. So I asked her what she might like. She said, well, things like, maybe writing habits. I was going to tell her. About the peanut butter (definitely only the crunchy kind). And the aspidistras. But I remembered the last time I told someone. I have to say, the police officers were very polite when they knocked on the door. And Tasers are really rather…
Ahem. Right. Perhaps we’d better not go there again (blush).
But there’s more to writing habits – at least, TJ’s habits – than peanut butter and aspidistras. Or even Tasers :-). So what are the printable bits? Well, a lot of what I write as TJ starts out, even if it ends up as a novel, as a short story. Or rather, a micro-short story. BORN YESTERDAY started out as a piece called THE DAY WE DIDN’T – only 1,830 words. And DAY itself started out as a single picture in my head. Two people standing on top of a hill, part dressed in the pouring rain. Because to me, a picture like that is both the beginning of something – and the end. When I say the two people are part clothed, sex tends to come (quiet, Jones Minor!) into things. But if the picture isn’t about the sex, isn’t about the rain – if it’s about the _people_? Can I get all of that into those words, less than 2000, and leave a reader satisfied? Or better – _not_ satisfied? Leave them glad they read it, but with questions, wanting to know more? And sometimes, even though they say in showbiz ‘always leave them wanting more’ – sometimes?
Sometimes the ‘more’ just has to happen.
As I’ve said somewhere else – I think every piece of writing should have a sequel. At least one, anyway. But one the author never writes. One the reader can’t help but write – in their own head, for themselves. Like I had to for that picture. And for the DAY it made. BORN YESTERDAY? Maybe I’ll leave that sequel to you. Maybe… (Big Evil Grin).

I hope this post has been entertaining. It sure has been for me… Born Yesterday was … something else! 🙂 … I liked how the mystery aspect kept me guessing until the end, I really enjoyed the characters, especially the fantastical characters (hehe, so, all of them!) and I really really liked some of the beautiful writing in places. The fantasy element was intriguing and the setting easy to picture. The couple of romps were, I guess, unexpected bonuses but they kind of fit into the story as well.