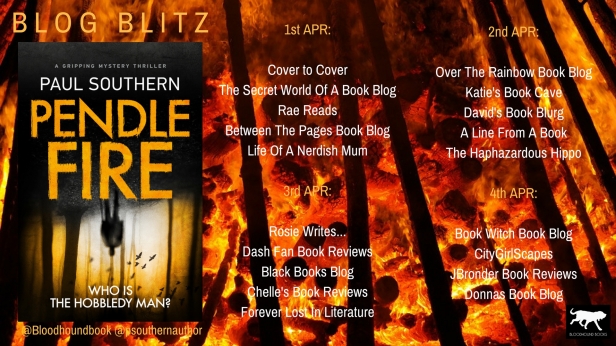 Bloody hell, guys… are you ready for this book?

Sorry, I am getting ahead of myself here… let’s do the formalities first, hey! 🙂 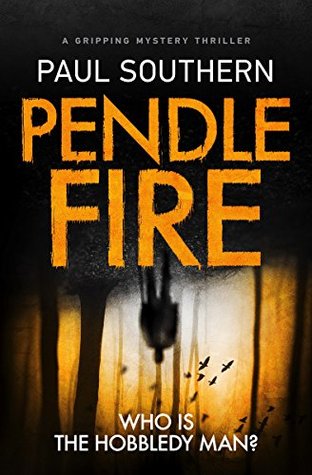 Social worker Johnny Malkin is battling a crippling workload and a hostile local community. That’s on a good day: things are about to get a whole lot worse.

Two fourteen-year-old girls are found wandering Aitken Wood on the slopes of Pendle Hill, claiming to have been raped by a gang of men. With no female social workers available, Johnny is assigned to their case. But what, at first, looks like yet another incident of child exploitation takes a sinister turn when the girls start speaking of a forthcoming apocalypse.

When Johnny interviews one of the girls, Jenna Dunham, her story starts to unravel. His investigation draws him into a tight-knit village community in the shadow of Pendle Hill, where whispers of witchcraft and child abuse go back to the Middle Ages.

One name recurs, The Hobbledy Man. Is he responsible for the outbreaks of violence sweeping across the country?

Is he more than just myth?

Pendle Fire is a dark and absorbing thriller, it does contain scenes which some readers may some find disturbing.

*My sincere thanks to Paul Southern and Bloodhound Books for including me in the blog blitz and for approving me for a review copy. This has in no way impacted on my review!*

Pendle Fire is the third book by Paul Southern that has found its way to my hands. *Shameless advertisement*— you are more than welcome to my reviews for ‘The Craze’ and ‘Daddy Dearest’— and I have to say, with Pendle Fire, Southern firmly makes a signature statement. Gritty, dark and disturbing but also clever and daring and challenging. This is what I have come to know from the author! Southern would never deal out a straightforward, single-sided story, and he never discriminates when it comes to choosing his villains.

There is no easy way to explain the intricate web the author has spun, but in its heart lies a legend of the Hobbledy Man. There is no further detail of the story I can add next to the blurb, because that would be just me giving you clues, but I will state that it does come with a few scenes that some may find utterly disturbing, or maybe the right word here would be – uncomfortable. Then again, the majority of thrillers have such content.

Having read previous works of Southern’s, I KNEW I was going to be presented with a very varied cast of characters straight from life. They’re weak, they’re strong, they’re evil and they’re kind, and a lot of the times they’re just pure nuts! More so, Paul does not at all flinch away from squeezing the darkest sides of the humanity onto paper. As I said- daring! Johnny Malkin, Tim Whittle, Nathan, Beth and all the other characters felt all too real and as the plot at the heart of the story makes a few of those characters question their sanity, I found myself entrapped in the same hesitations in my mind.

Pendle Fire is a mixture of fast-paced, thrilling life-threatening moments, crime (the most callous kind) and mystery. The plot is not just surrounding the Hobbledy Man, a legend that seems to bring havoc to the area every now and again throughout history.  The beliefs of simple-minded people are mixed with corruption, extreme opinions, sinister agendas and the everyday troubles of regular people. In fact, the whole story was blown into such a proportion, there was a moment, right before it all started tumbling down towards the finale, where I thought- how will the author bring it all to a conclusion?! Let me tell you, that ending didn’t come without the final blow.

Johnny Malkin, the social worker in the thick of it all, is someone I could really feel and root for. Social work is never a simple task and one that requires someone with kindness and heart and confidence to always do the right thing. But no profession comes without its pressures- Johnny is simply a buried man when it comes to his workload and throughout it all, he continuously tries to throw the regulatory meaningless tickboxes on a piece of paper out the window and instead connect with a person, one to one, to really help them. He has put the ethos of helping others ahead of himself as his own health deteriorates and it comes with a heavy price to pay. Will his own relationship survive through the thick of the work pressure? Will the madness that has taken over Pendle Hill taint his mind to a point of no return?

From page one to the very final full stop of the book, I was at the edge of my seat. The pace was unrelenting and as the story moved from chapter to chapter, it snowballed into something huge and difficult and hopeless. Pendle Fire? More like Hellfire! Child abuse, drug abuse, dangerous beliefs demanding bodily sacrifices and racial clashes that bring a town to its knees. All these themes in a single book branched out of a single cancerous cell nestled within society’s very foundations- the cell of truth which once brought society together has now been tainted by fear and ignorance! The balance in between turning a blind eye and wanting to do what is right and just is the central point of this novel, because truth can mean losing a life, truth can mean saving a life… And here, the truth will also mean that one has to accept that they are a freaking lunatic by trying to explain away the man-made hell through the supernatural.

I simply love Paul Southern’s style. His books have always taken me on a wild ride with quite a lot at stake. So, if thrillers are your go-to genre and you are ready to face the sickening underbelly of society- jump right in!

Paul Southern was born in the 1960s to itinerant parents who moved from city to city. He lived in Liverpool, Belfast, London and Leeds, then escaped to university, where he nearly died of a brain haemorrhage. After an unexpected recovery, he co-formed an underground indie group (Sexus). Made immediate plans to become rich and famous, but ended up in Manchester. Shared a house with mice, cockroaches, and slugs; shared the street with criminals. Five years later, hit the big time with a Warners record deal. Concerts at Shepherd’s Bush Empire, Melody Maker front cover, Smash Hits Single of the Week, Radio 1 and EastEnders. Mixed with the really rich and famous. Then mixed with lawyers. Ended up back in Manchester, broke. He got a PhD in English (he is the world’s leading authority on Tennyson’s stage plays!), then wrote his first novel, The Craze, based on his experiences of the Muslim community. He has three other published books and has written for ITV. He was shortlisted for a CWA Dagger award in 2002 and received positive reviews from national and international press, including The Guardian, Arena, Radio 4, Ladsmag, and Kirkus, amongst many others.

Join 3,608 other followers
Follow Cover to Cover on WordPress.com