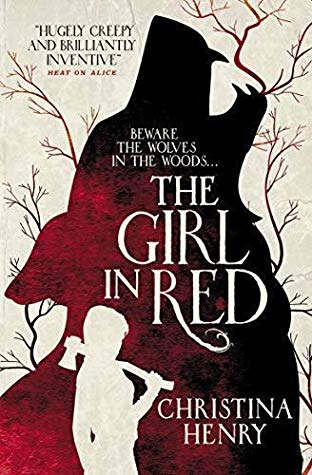 It’s not safe for anyone alone in the woods. But the woman in the red jacket has no choice. Not since the Crisis came, decimated the population, and sent those who survived fleeing into quarantine camps that serve as breeding grounds for death, destruction, and disease. She is just a woman trying not to get killed in a world that was perfectly sane and normal until three months ago.

There are worse threats in the woods than the things that stalk their prey at night. Men with dark desires, weak wills, and evil intents. Men in uniform with classified information, deadly secrets, and unforgiving orders. And sometimes, just sometimes, there’s something worse than all of the horrible people and vicious beasts combined.

Red doesn’t like to think of herself as a killer, but she isn’t about to let herself get eaten up just because she is a woman alone in the woods…

Little Red Riding Hood – who didn’t love this fairytale in their childhood? I did, it was one of my favourites alongside Wolf and the Seven Young Kids. Anyway, seeing as I missed the excitement train for Alice and its sequel Red Queen, there was enough hype around for these books that made me keep my ear to the ground on any upcoming books of Henry’s. The Girl in Red was to be the one to get me acquainted…

The Girl in Red sounded perfect- a young woman with an axe, in the forest, surviving. Totally down for that, me! A mixed-race, bisexual young woman with a physical disability, might I add, who represents independence and strong will. Yes! Furthermore, I was rubbing my hands together for the whole dystopian ‘wolf’. Hence, at first I was like:

But then… the little irritable niggles started to pile up….

I swear I didn’t want the niggles to be there, but they were; eyes were rolled. Too may times. Darn it! I’m sorry… I can’t help it, the contradictions confused me and the voice of the POV just made me feel utterly stupid! Not kidding. Seriously. And the man-hating just got to be too much, as well.. jesus… if you happened to be a man in this world, you can count your hole 90% of the time you’re not just a man, you’re killer rapist and stupid to boot!

This means—> Time to tell the fans to lay down arms and kindly leave this review now. Yep, now is fine! (But do come back later for any other review, your presence is much welcome! See, I don’t want you- as the fan- to have the heartache of reading a less than gushing review of your favorite book. Also important- I read the ARC. I repeat, this review is based on an ARC. I mean, maybe the things I point out do not exist in the finished/published version. I won’t know, because I repeat- ARC review here!!! 🙂 Uhm, also, SPOILER WARNING!!!

Red – Red. Red, Red, Red. Honestly, of course – she is a woman alone in the woods in terrible times where death is aplenty due to some government cock up or another and folk like to be super selfish and mean and murderous in times of crisis, and Red only has one ‘real foot’, (which she likes to remind the reader aaaaallll the (too many) time(s)))… and yes, I totally could have sat around a campfire with her and spin conspiracy theories because I would have felt safe- she did what had to be done but damn, she confused me a lot. Maybe it was the way her POV came across – honestly, hand on heart, I do not know what to tell you about her age. I think she’s in college BUT I am not sure because something about the POV made me think of her as a 10 year old? And the story is not even in first person.

And the ‘in my head 10 year old’ Red managed to make me feel way stupid (because a lot of ()’s was being used just to make sure her smarts and super duper knowledge (from books and films) that exceeds that of everyone else’s smarts has to be made clear, thus making the reader (aka: me) feel like there isn’t enough brain power in anyone to properly read and/or interpret the story or remember the simple fact that one paragraph ago her ‘not real foot’ was mentioned twice so it has to be pointed out again as the content in the ()’s for a further 15 times or so). That was a nope for me, as you understand. Being spoonfed information in ()’s really wasn’t earning my favour.

The coyote (the man) had taken that relief from her, and now she was hungry (for she hadn’t eaten her stew) and angry (for she’d had to kill him and she really hadn’t wanted to) and resentful (for her leg ached and she was walking when she didn’t want to be walking and she was carrying his stupid hateful gun).

It simply has to be the style of writing in this particular story that I didn’t gel with. I mean, sometimes too many ()’s is just too many and keeping the sentence going with multiple use of ‘and’ makes me think of a 10 year old who’s reporting about their exciting school day very excitedly. Yes! I am mean, my brain is weird, sue me.

Moving on with the contradictions… It’s great she was interested in science and knew all of the super important stuff that is required for such dystopian scenarios, like the importance of antibiotics. It’s also great that Red gleaned her survival skills and smarts from Hollywood movies and fictional books – I mean, who doesn’t yell at the TV/book when characters do utterly unthinkable mistakes? But personally, I do feel there was a point at which Red’s obvious supremacy over every other human being alive when it came to brains, started feeling patronizing. Not only that, but then, the MC’s thought-trail turned into a checklist exercise of how many of the current bad things can be mentioned in the story?! Let’s get as many in as we can, maybe one or 2 of those themes will stick in each reader’s mind and they can go and educate themselves further. Viva la revolución! Crap education system mentioned? Check! Issues with healthcare included? Check! Politics? Cheeeeck! People generally being inconsiderate? Check! To bring but a few examples from the ARC:

“They thought treatment meant a cure,” Red said. “There’s not enough science education in this country.”

…and the two things Americans liked to stockpile in case of emergency were canned foods and guns.

She didn’t expect there to be any left because the first thing folks asked for when they got sick was antibiotics (whether they needed them or not).

I can’t look past the fact though that it is an interesting retelling. It’s not at all a soft twist on the original, but a bold and unique version that will find its intended audience, I am sure. There is nothing complex or confusing, there is the exciting dystopian elements with a wonderful eensy scifi twist and quite a few edge-of-the-seat moments. So, call me stubborn as an ox, but I can’t look past the fact that when a character preaches about folk being inconsiderate by stopping to chat in the shopping isles, thus blocking the isle, then the character quickly loses the street cred when in the next breath they state:

Being so considerate went against the grain of her personality.

And finally, since I am already at it and going to be trolled for the end of days anyway for not liking this book all that much, I’m going to go all out, why not. The vibe of (one of those sorts of) feminism. (Because feminism has many interpretations) Well… wow. The girl power (am I allowed to say ‘girl’?) is strong in this one because as is current ALL of the MEN in ALL the world are dumb, macho, generally bad and out to rape and kill women ALL the time. Obviously, apart from your father, brother and ONE dude who is the hero. (By the way, how are you getting along with the ()’s in my review? Starting to annoy you yet? Maybe I should have added a few more into the mix!)

Aaaanyway… Whilst The Girl in Red didn’t turn out to be my preferred cup of tea due to the balance of many things feeling off, I can see how it can be an exciting read for many. It reads quick, it has snark, it has the expected dystopian coolness to it with the kick-ass female character and it’s packed full of action! I accept the fact that my personal preferences came to play way too much with this particular book, frustrating me more than I expected, but I don’t think I am finished with the works of Henry yet… I want to try more.

28 thoughts on “The Girl in Red by Christina Henry”