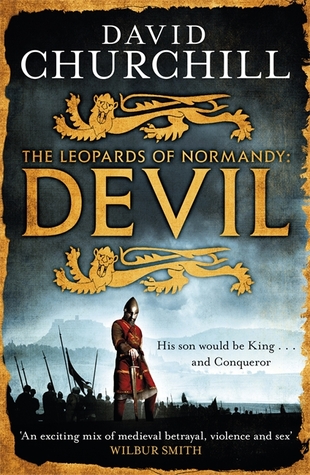 My heart must have broke about 4-5 times during this wonderful book… Bloody hell, I seriously cried… Twice!  And I feel like I have so much to say about this book without knowing where to start…

The noble families of Europe are tearing themselves apart in their lust for power and wealth.

Emma, Queen of England, is in agony over the succession to her husband Canute’s throne … while her brother, the Duke of Normandy’s sons battle in the wake of his death.

Robert, the younger son, has been cheated of Normandy’s mightiest castle and sets out to take it by force. He emerges from a bloody siege victorious and in love with a beautiful – and pregnant – peasant girl.

Robert’s child will be mocked as William the bastard. But we have another name for him
… Conqueror.

This book is based on historical events of Britain, and is the first book in a planned trilogy. I look forward to reading the next one as William the Bastard (Robert the Duke’s illegitimate son) will have some pretty difficult situations to overcome. Some of the characters are based on real life historical people and some of them are fictional. Author makes it easy for the reader to make a difference in between them by providing an overview of both. There is also a guide to the different houses of lords, kings and dukes explaining who is related to who.

The book starts with a prologue around Rollo the Strider. A giant of a Viking who sets this whole book, the history in motion. I don’t think I have ever enjoyed a prologue as much as I did starting this book. It was so effective and pulled me in to the whole story, to the whole world yet to evolve on the pages.

The 450+ pages of this book are full of power struggles, personal sacrifices, politics, religion, hypocrisy, but also wit, respect and banter. And love. Love, as we tell ourselves, will conquer all. But will it?

Author uses simple short sentences which make the action scenes and the complicated politics and relationships so much easier to understand and in this case the proof is in the pudding- simple does work. Long, complicated, overly described scenes are not necessary to deliver an impactful book. And this is exactly how I would describe this creation- impactful. This simple structure of sentences helps a lot in keeping the story flowing perfectly and the reader’s focus throughout.

The way author describes characters and situations is so wonderfully done, that the rest of the world around the reader dissolves. It’s just the book and those words. Magical. I liked Rollo from the prologues so much so that I was sad I only got to read about his actions in the prologue. Thankfully, Robert, Rollo’s descendant, inherited much of his forefather’s personality. Robert the Duke was most definitely my favorite character. Headstrong, fair but sadly, ends up in the deceitful web of religion. Life really isn’t easy when you’re a powerful man. I can’t tell you how many times I yelled at the book, trying to get through to Robert to flip off the Archbishop (Robert’s uncle) and go back to Viking ways.

There was so many characters I thought I could take a liking to, only to find out, every single mofo is out for their own benefit and it made me so angry, I wanted to be at the scene and start “Jarl the Viper-ing” people out of equation. Jarl the Viper is one of the fictional characters who is basically, what you’d call in a modern day world, a Hitman. An interesting character who I cannot wait to catch up with in the next installment of this series. But there were also characters whose loyalty saw no bounds. People without whom the kings, dukes and lords could not survive.

If you enjoyed watching Game of Thrones and Vikings, then this book is definitely a must read, and will not let you down. You’ll read about battles, wins and losses, horrible characters and death. You’ll read about deceit and difficult decisions. It’s dripping with hypocrisy and if there’s one thing I can’t stand, it’s hypocrisy, but as we all know, despicable acts make the most interesting reading material!

I received this book via bookbridgr! Thank you!

I wish to congratulate author David Churchill for writing this magnificent book, for writing so brilliantly and for creating those exciting fictional characters to carry real historical events!

6 thoughts on “The Leopards of Normandy: Devil by David Churchill”