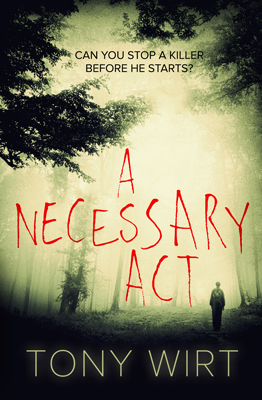 Can you stop a serial killer before he starts? If so, should you? How far would you go?

The students at Lake Mills Community High School knew there was something wrong with Scott – but what David saw firsthand was more than they could ever imagine. He and his best (only) friend Matt were content to keep their suspicions to themselves until a simple trip to the library sets them on parallel trajectories where even the most careful plans have unexpected consequences that can rock a community and reverberate long after they’re gone.

Fifteen years later, Matt loses his high-profile reporter gig and is forced to return to the town he did everything he could to leave behind. He gets a shot at redemption with the small-town weekly where he started and quickly discovers a community that has moved on from the past. Well, everybody but David. He remembers everything and doesn’t buy a thirty-something Scott’s “normal” act. There’s a madman hovering inside. After all, some people never change, right?

Something the entire town is reminded of when the first dead girl turns up.

The whole story starts in 1996 and I was disgusted with the beginning of the story- I fucking hate bullies. Scott is a total psychopath and every student and teacher who never did anything to address the issues with Scott are a bunch of pansies! Yeah, pretty riled up, me. Hook, line, sinker- I was into the whole book.

David and Matt witness Scott’s awful behavior. David, in fact, has experienced Scott’s psychopathic tendencies first-hand. Some horrors never leave David’s memories. Some horrors still give him nightmares and sleepless nights. Add a thick layer of guilt for doing nothing, saying nothing to stop Scott and you have a pretty broken young man.

Until he realizes that he actually could do something…

David’s near obsessive plans and schematics on how to save the small town from an impending doom that Scott is surely about to unleash upon it’s population any day now, surely, push him into a series of events that for the purposes of not spoilering the story, I can’t reveal.

When all is said and done, the story fast forwards us 15 years into 2011. Matt is back home after having lost his job and unexpectedly one of his first reporting news is what seems to be a murder case. A teenage girl is dead. Burnt in the cornfield very close to her home. What follows is an investigation and another dead girl. Similar injuries.

David insists that it’s Scott behind it all. Scott the psycho. No matter what everyone keeps saying about him being a ‘changed man’. So when David manages to make Matt see the light, the two come up with a plan to nail Scott for his crimes and be free of his evil for good.

Is it all that straight forward, though?

To be honest, I could kind of see ‘it’ coming. And then I couldn’t, and then I could… Tony Wirt did a pretty good job at making me suspicious about this character or the other. It was a bit like- ‘here’s a clue’ and ‘hah, it’s not valid anymore, here’s a new clue’…

14 thoughts on “A Necessary Act by Tony Wirt”