*Hello Everyone, Dean F. Wilson’s The Great Iron War book series introduced me to steampunk genre. A genre I never thought I’d enjoy as much… Dean has been very kind to let me read his books in the series and I have absolutely loved his writing. There’s a certain quality and consistency in his books which makes me comfortable knowing that when I pick up the next in the series, I won’t be disappointed. I’ve been badgering Dean to write a guest post for a while 🙂 and the poor guy has been busy with writing the next book but again, he didn’t let me down.  Enjoy! PS! Check out the end of the post for some book news!*

The Inspiration of The Great Iron War

Perhaps the most ubiquitous question when writing fiction is: what inspired it? Some wonder if it is the author’s own experience, or his or her own views, or if something bigger (such as current events or those from history) were the inspiration.

When it comes to The Great Iron War series (and arguably this applies for most books too), it is a mix of all the above.

The initial spark for the series was a part of Irish history: the smuggling of contraceptives into the country, particularly a high-profile case in 1971.

This made me think of how a similar situation would play out in a fantasy or science-fiction environment, which led to the idea that demons have taken over the birth channels, forcing people to rely on contraceptive amulets. These are then outlawed by the demonic Regime, and thus enter the amulet smugglers, like the main character Jacob.

Once I had settled on the idea of “demons” in the story, I knew I wanted to play that relatively subtle. They look and act like humans. The fantastical elements are there, but they are subdued, which I think helps make the story more relatable.

It also opened up the idea of how we demonise our adversaries. Are these people really demons, or do we just call them that? Indeed, the Regime participates in almost identical propaganda against the Resistance, attributing all kinds of atrocities to its leaders. Further still, a neutral faction known as the Armageddon Brigade engages in a similar kind of information war.

The Resistance calls the ruling powers the Regime, a kind of nod to the many dictatorial regimes of history and the modern world. The term is somewhat derisive, and the Resistance does not acknowledge the name the Regime gives to itself: the Iron Empire. To do so would acknowledge its leader, the nameless Iron Emperor. In this story, words carry as much weight as weapons.

When it comes to characters, I am inspired by real-life people, characters in books and film, and concepts and archetypes. I often start with a question about an individual that I want to know the answer to. Sometimes I don’t know that answer when I start, and so I have to learn it gradually just like the reader does.

Jacob, the main character, is initially motivated by greed. This came about naturally from his role as a smuggler, but I wanted a reluctant hero that was torn between his desire to get paid and a newfound desire to make a difference in the world. As I followed him deeper into the story, the question of why he is so obsessed with coils (the currency of the world) comes up, and the answer came very intuitively from the character himself. I won’t spoil this, but maybe the real motivation isn’t greed at all, but security.

The Great Iron War combines elements of warfare inspired by the two World Wars, providing a backdrop for some exciting action scenes, but the real heart of the story is the characters, those struggling to end the war and save humanity. I think that idea is timeless, and is inspired by a basic belief in humanity itself. 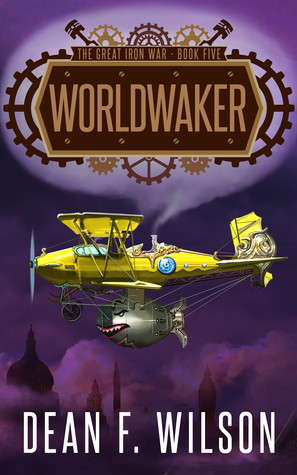 If you haven’t read books 1-4 yet, then take a look at these covers- aren’t they all just so pretty? And there are limited offers going on the books at the moment so go grab them while you can and don’t forget to leave a review! 🙂 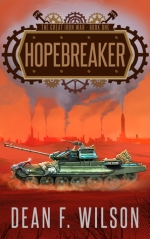 4 thoughts on “The Inspiration of The Great Iron War by Dean F. Wilson”