See? I told you I only need a couple of days before directing my full attention back to the Other Books in the review list. The Warrior Queen trilogy in The Saga of Thistles and Roses was like my mother’s cooking on a cold winter’s night- consistently good, comforting and addictive. Sure, I truly felt like a spawned fish for most of the day at work because of lack of sleep, but it was totally worth it. I haven’t done a reading session as intense for quite while…

You can find my review for Book #1- For King and Country- HERE. I rated it 5 stars, by the way. Pure enjoyment for my inner bookworm and generally impressed by how good a book can be.

Chains of Blood and Steel, Book #2 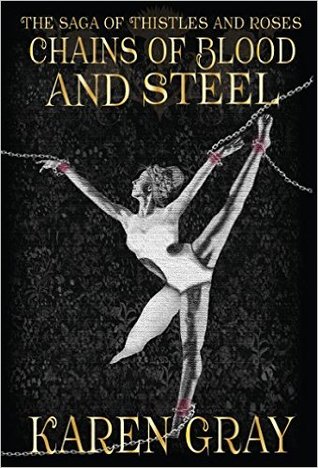 Hours after the mental onslaught by Edward, Mòrag is still trying to piece things together. She trains daily with Colonel Tesso, in an attempt to bring her physical skills up to the standard of her mental ones.

Brax continues to struggle with visions of his master and fears his presence will put Mòrag in danger as his mental chains are pulled tighter and his grip of reality begins to loosen.

The Spymaster’s daughter struggles to deal with her abusive father, hiding a secret she is prepared to take to the grave; while John, who’s life has been a lie, discovers the truth about himself through Ava. Brought together by a chance encounter, they work together to break the chains of blood and steel that imprison them.

Well I’ll be damned… the start of Book #2 was thunderous. Not only was I surprised by one major twist in the story which made me mentally go- “I knew it, you S.O.B!”, but a few pages later there was another major revelation to which I exclaimed (and pardon the bad language)

And in addition- I can’t believe I liked General Marcs even a tiny bit! What a…!

The thunderous start with surprising revelations set the tone for Book #2 and while I found out more about Ava and her relationship with her father, Gen Marcs; Mórag was still quite present in the story. The struggles Ava faced were really, truly ugly and I couldn’t agree with her refusal to sort the situation out until I found out why she was reluctant to save herself. And then, surprise after surprise. I shit you not, I was fully entertained. The elements of power, of ‘magic’, which some of the characters possess make for interesting soulsearching trips. And when I say soulsearching, I mean it quite literally.

I was so excited, that it reminded me of this dude (below; only 27 secs but laughs guaranteed!)

This was a book in equal measures very grim (which I enjoyed of course, psycho as I am, but only in parts where the bad guys received what was coming to them) but also focused around another relationship of blossoming love. In fact, this relationship was quite different to Brax’s and Mórag’s but will surely keep the romantics at heart fully contented. The characters are consistently enjoyable and… you know, basically, I can’t tell you anything about the story because I would just spoiler it for you and the enjoyment I got out of the twists and surprises was something I would not want to take away from you. So I’ll just say that I had a near conniption trying to read as fast as possible because I was hooked 100%.

I really got into the swing of Scottish words and loved that there is a Russian cat! I love Russians… I’m a Russian-loving Estonian, ha! But seriously… It was just something that was familiar and I did not need to check the glossary for the meaning of Russian words… *wagging own tail*

Overall, a strong proper continuation to book #1 which got my heart thumping and ended on a proper cliffhanger… Luckily, book #3 was available and so I continued my massive weekend readathon of The Saga of Thitles and Roses… 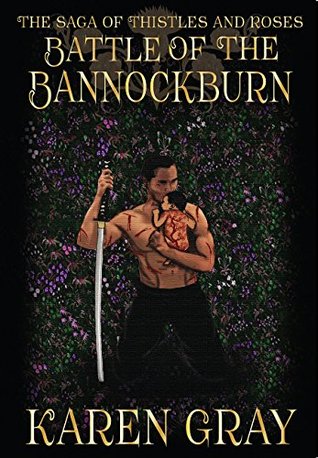 In the smoky aftermath of the still smouldering remains of several buildings in Sruighlea Castle, chaos reigns supreme.

Edward has assumed control of Sasann and proclaimed himself King, and with the Devil’s Dog back under the controlling hand of his master, no one dares challenge him.

Mòrag struggles with the darkness growing inside her, and without Brax’s calming companionship, her fragile control is slipping.

When Edward sends his pet to sack one of Alba’s border towns Mòrag retaliates by striking out at Edward’s own home in Lunnainn; triggering a freefall of events that culminate in a full-scale battle on the Bannockburn.

Is Karen Gray for real? Or is she some kind of Scottish voodoo vixen pulling a spell over the reader (I know, that doesn’t make sense technically, but… whooaaa!) Book #3 starts off right where Book #2 ended… I have no other way to put this but- brace yerselves and join the mad ride that is The Saga of Thistles and Roses.

When I thought Book #2 was grim with what’s happening to Ava I think Book #3 managed to top the darkness by being even more heartbreaking and full of scenes that were just out of this world for me.

Gray kept on surprising me with character development. Proper hard corner turns into new revelations making my head spin and me? Totally addicted. Each character is pushed to their very painful limits and because the delivery of the characters is so good from the very first book, I was heavily invested in all of them, whether in a good or bad way, and that added a massive impact. My heart broke over and over and over and over again and I was truly… totally oblivious to the real world around me as the story took me in.

Book #3 focuses on Nora and Aron, the spying twins, but all the other characters are also present which didn’t leave me questioning and wondering what was happening to our powerhouse of women- Morag & Ava… There were also new interesting characters added and the series just keeps getting better with the addition of new and exciting.

While the whole action is taking place in Scotland, we have John and Raymond who are actually Japanese and their cultural backgrounds add further flavor to the saga. My word, there’s just so much.. so so much in this story that is awesome.

The added element of giving some spotlight to the animals was nice. I chuckled when Mórag indicated that she didn’t mind what Rannoch is doing in the bushes… with whom? I can’t tell, it’ll be another surprise for the reader! Rannoch has his own history and past which for most part he can’t remember, but when he meets his old enemy, Silas, on the battlefield, glimpses start to come back.

Karen has created a truly abominable set of villains with no redeemable qualities to them. Simply repulsive! Add this to the fact of their nearly impossible to defeat powers and you got edge of the seat stuff right there!

But she has also created a set of villains that I came to love. Yes, you read it right. Not ‘love’ because the villains are so evil they’re giving you nightmares and the inner horror-loving freak revels, but ‘love’ in the sense of- You’re my new hero, please don’t die!

Where there’s darkness, there’s also light… The romantic aspect continues into Book #3 and for a a number of new couples. There is now also more, something extra- a true sense of family and friendship in the dark times and if that doesn’t display good balance, I don’t know what will. In the end, not all ends in a fairytale… I will just say, the ending of book #3 made me want to stamp my feet and cry for hours but I appreciate the need to keep things real. I understand and I accept. I will just miss that one character so much even thought in previous books ‘they’ were on the shit list.

Overall: This saga is hard to leave unfinished. Even with the vast amount of characters- each and every one is unique and will remain memorable, whether for their good or their bad. Gray managed to rip me apart, slowly, and then put me back together, a glimpse at a time. A new surprise at a time. Unbelievably fantastic!

I think it goes without saying that both books get 5 stars from me. For the level of enjoyment they provided and for the level of entertainment. The twists and surprises, the dark and the light… All the love and hate… I cannot wait to  read the next book in the saga to find out how all the characters are doing… There is a natural progression of each and every one of them and as they fall or rise, I want to be there every step of the way.