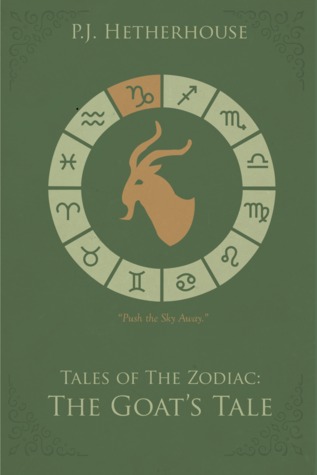 It is the distant future. Time has seen humanity rise and fall many times, seemingly  unable to learn from the mistakes of the past. Now, on the brink of another decline, twelve people step forward to change the course of destiny. Each of them has a tale  to tell.

The tales of the zodiac is a series inspired by Celtic mythology, Arthurian legend and, most importantly, astrology. Living in a time when Mother Nature has resumed control, the human race has regressed back to its feudal past. It is here, in two civilisations gripped by political intrigue and religious fanaticism, that the tales take place. We begin with Capricorn – The Goat’s Tale.

A boy of sixteen, Gruff is old beyond his years. He is a dour, dogged, determined  character driven by competitiveness and his rigid moral code. Unsurprisingly,  this attitude wins him more enemies than friends and, eventually, earns him the most powerful enemy of all – the king.

This royal enmity sets him on a quest that will change his life forever. With nothing but sheer belligerence, and the help of three fierce companions (including Cancer and Scorpio), he defies the king and ultimately achieves an unthinkable victory. Above all things, The Goat’s Tale is a tribute to the indomitable soul of the Capricorn.

There are two very important promises in the blurb that made me accept the book from Hetherhouse in exchange for a review: “political intrigue” and “religious fanaticism”. These two ‘things’ for me are like- bring it on, and bring it on, it did!

The following is the first of twelve tales. Each tale documents the travails of a different protagonist. These people are drawn from all walks of life but they are linked together by both destiny and astrology. I talk of destiny because not only are they the personification of their sun sign, they also stand together at the end of the world. In their own way, their actions will influence the course of human history.

Each character represents their sun sign with the strengths and frailties characteristic of them. The truth, however, is that it will require their combined might to stand against the threat that faces them. I begin with Ser Gruff, the Capricorn, the ‘old man’ of the Zodiac. It is a tale of guts and determination, of an almost pathological inability to give in. Without Ser Gruff, the twelve would never have met…

What is The Goat’s Tale about? Well, the story of Gruff is one of sheer determination to fight for what he believes in, even if it means being added to the King’s bad books. It’s Gruff’s story about accepting the quest and his fate, even if it means his death. A story of survival in the harshest of conditions where boy becomes man through physical and mental challenges. A tale of social class struggle, royalty and dealing with deadly religious fanaticism. How could I not like this book?

I enjoyed Gruff’s character. His sober and realistic, if somewhat grumpy, viewpoint on everything is what essentially makes him a really strong presence. When I think about the first book setting the tone for a series, then I couldn’t have imagined another sun sign starting the tales.  His survival instincts and intelligence (even if such is not expected from a peasant) are paramount and pivotal to this adventurous tale.

The world has started over a number of times. In this book the adventure will take the reader to two different countries: Tallakarn and Brightstone. Both of which are at a completely different level in terms of advancement.  In between the two nations lies a near impassable land that is only inhabitated by the dangerous savages- the only folk who manage to survive in harsh, snowy conditions, some of the clans even known for cannibalism. Not many have crossed these unforgiving lands to tell the tale and naturally, these lands are also the reason why the two nations are so entirely different from each other.

It is in Tallakarn where Gruff’s story  starts, his home. A kingdom much like any other with a King, his pawns and corrupt right hand men. The highborn and the lower classes, the peasants who don’t even socially rank on their scale. In Tallakarn is a school that is mostly educating the high class boys. The King, wanting to come across as kind and giving as a hypocrite would, allows 12 scholarship places to boys from lower classes. One of those peasant boys is 16 year old Gruff, the Goat.

My peasant heritage is a daily subject of mockery from the boys around me, and if I were ever to allow the concept of ‘my place’ to carry any weight then I would have given up my education long ado and joined my father with the goats.

One of Gruff’s classmates is Prince Libran. Son of King. When the prince was born, the King scheduled in a tournament for boys to go ahead as soon as prince turned 16. Every boy in school will be prepared for the tournament. And not in the way you’d think… Yes, they all get training, however, it is quite clearly expected that the prince should win. No matter that he is a shy, quiet mannered, and surprisingly a really decent royalty. Not competitive at all. The boys, each and every one of them, will need to make sure that when the time comes to win, it should only be Prince Libran to cross the finish line as winner.

Gruff, representing the Capricorn star sign, is characteristically determined. He is stubborn and believes in his own right, damned be what is to be expected of him and damned be the ‘farking‘ societal norms.

There will come a time when the prince sees that the truest servant is the one who did not bend.

When Gruff finds himself in front of the King for having done what no one else dares, he will be challenged to go on a quest. With a companion- a cheerful knight, Ser Morrigan-  he sets off and thus starts a wild survival trek across the uncharted lands where staying alive is the only thing that occupies a man’s mind.

The quest is one of danger and full of eye opening new things for Gruff and his companion(s). It will take some mighty battles, both physical and mental, for all our characters to overcome and some even pay the price with their lives.

Brightstone is a place ruled by religion- they do have the Son of God, after all- and their way of life is more city-like than Tallakarn. To keep the spoilers to a minimum, I will only say that Brightstone, even though it looks more like a paradise with its palaces and white stone, has an underlying dark secret:

Even as time passes, the words do not sink in. I begin to think that there is a barrenness in me where other people’s souls must be. I cannot believe. I cannot accept. Even if it means my life. I could pretend, but a pretence is all that it will ever be; I will never be able to leave, to talk freely, to be myself again. And if that sorry existence is the best that I can hope for, then death is scarcely less preferable.

The Goat’s Tale was an adventure full of events and interesting thoughts. The character development is truly well done. While some of the settings, such as the barren icy wilderness, may seem like a difficult environment to create much excitement around, then in this case the clinical setting gave way to a more rich cast of characters and unique mental ponderings and obstacles to overcome.

At this stage you may be wondering about the whole star sign/astrological side of this book. No, there will be no horoscopes included in this fantastic tale, but the idea itself by P.J. Hetherhouse to create his characters by star signs is simply so cool, I wish I would have come up with it myself.

On the author’s website you can  find some lovely art and music for each star sign and you are able to sample the book on Amazon.

I almost wrote to the author to enquire about his plans for the next release in the series but I am glad I visited his website first because there was news that he is working on the next book and I will most certainly look forward to it. I cannot wait to see all the other characters coming to life in this adventure according to their sun sign.

My rating: 5 stars… I found it to be a solid, solid book that managed to keep my interest from beginning to end. I loved the character development, I loved the adventure and the promised political intrigue/religious fanaticism was subtly well done. Could not find any fault with my reading exerience.

21 thoughts on “Tales of the Zodiac- The Goat’s Tale by P.J. Hetherhouse”