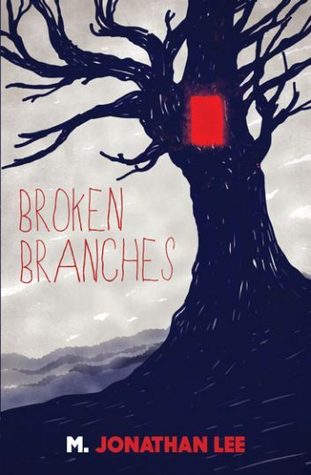 ‘Family curses don’t exist. Sure, some families seem to suffer more pain than others, but a curse? An actual curse? I don’t think so.’

A family tragedy was the catalyst for Ian Perkins to return to the isolated cottage with his wife and young son. But now they are back, it seems yet more grief might befall the family.

There is still time to act, but that means Ian must face the uncomfortable truth about his past. And in doing so, he must uncover the truth behind the supposed family curse.

First of all, I would like to note here my gratitude to all at Hideaway Fall for accepting me into the fold as a reviewer and sending a paperback of Broken Branches! Thank you also to M. Jonathan Lee… for writing this book, and sending it out into the wide world.

Thing is, it must be the moon phase or something but I can’t even think about this book without tearing up! Up until about 80% mark in the book, I really didn’t know where this was going but once I noticed the subtle clues and it started to dawn on me what the whole story was about, as well as reading that ending- I was floored. A right kick in the feels. Actually, I can’t ‘blame‘ the moon phase for my emotional state… that would just be mean and uncalled for towards the book and the author. Broken Branches sends the reader a strong message around mental health and does so by using mystery elements. It’s quite possible that the mention of a curse, while making realism lovers cautious, actually worked  wonders in delivering punchline. I would go so far as to say, the mystery made the message all the more real when it mattered!

I refuse to tell you anything about the plot- what you get from the blurb is truly all you need to know. But also know this- you can not ever guess where this reading journey is going to take you (unless you’ve been spoilered of course!).

I would describe the majority of the book to have a sombre atmosphere. Things are just not going really well for our characters involved. Not in present timeline, nor in the past. I really did feel for Ian, 100%… until he obviously developed an obsession with the curse, and made things even worse. At various times I blamed Rachel, Ian’s wife, for being moody, even though I didn’t know the cause (how judgemental of me!). Then I blamed Ian for his obsession. And then… Then I wanted to take all of my thoughts back.

Broken Branches was a sorrowful and unexpected surprise for me. Sorrowful yet not suffocating… until…

It was also a surprise with its writing style, because apparently there is a way to write highly detailed descriptions and settings without feeling laborious to read. This was a first for me. Through the book, I paid immense attention to every word that was on the page and I was surprised at myself for not getting annoyed with it (because sometimes I do, get annoyed with too much description and not enough dialogue)… So, what is different in Broken Branches? How did it work so well? I don’t know… it must have been the balance, the content of those descriptions. I could feel the dedication with which those words were written down. Does that make sense? But then… then, when you find out the overall picture, those descriptions and every little detail that Lee wrote down, it just hit me that it was necessary, because it all definitely truly matters! If there is ever a book that you need to read in full to be able to give it an objective review, Broken Branches is one of those books.

I finished this reading it late last night and I am still reeling with emotions. I am still coming to terms with all and everything that is continually making connections in my head… not least of those details that I am still processing is the title… Broken Branches… it relates and connects to everything, especially once the book has come to an end.

So yes, I really really had a strong experience reading this atmospheric and clever book, which in its message is important. It has an ending that I did not expect until the very end and it made all the difference… It made me and it broke me, but it also left me with a sense of hope. There will be a way forward from that curse…