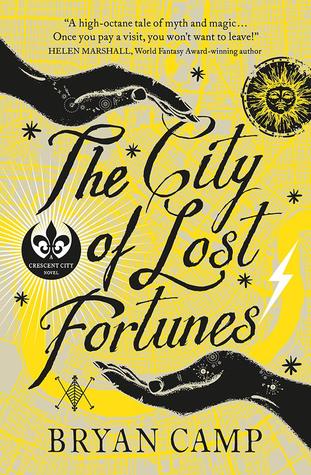 The fate of New Orleans rests in the hands of a wayward grifter in this novel of gods, games, and monsters.
The post–Katrina New Orleans of The City of Lost Fortunes is a place haunted by its history and by the hurricane’s destruction, a place that is hoping to survive the rebuilding of its present long enough to ensure that it has a future. Street magician Jude Dubuisson is likewise burdened by his past and by the consequences of the storm, because he has a secret: the magical ability to find lost things, a gift passed down to him by the father he has never known—a father who just happens to be more than human.

Jude has been lying low since the storm, which caused so many things to be lost that it played havoc with his magic, and he is hiding from his own power, his divine former employer, and a debt owed to the Fortune god of New Orleans. But his six-year retirement ends abruptly when the Fortune god is murdered and Jude is drawn back into the world he tried so desperately to leave behind. A world full of magic, monsters, and miracles. A world where he must find out who is responsible for the Fortune god’s death, uncover the plot that threatens the city’s soul, and discover what his talent for lost things has always been trying to show him: what it means to be his father’s son.

The world is a house built from contradictory blueprints, less a story than it is a conversation. But it is not a world without complications. Not without conflicts. Not without seams.

Jude Dubuisson is a street magician of New Orleans, a ‘bit of a bastard’ who constantly wore, before Katrina, a smug ‘fuck you’ grin. Post-Katrina, Jude has used every charm and spell available to him to be as unnoticed as possible. The hurricane left the city devastated and his magic out of sorts.

But one day, Jude gets an invitation to a card game hosted by Dodge, the fortune god of New Orleans, and as the high stakes are revealed, things are about to change for Jude again. Not only does Jude draw a hand of cards that raise more questions than answers and somehow ends up gambling away very important things about himself, the fortune god of New Orleans is murdered.

Mourning, the management of everyone ‘supernatural’ and magical, wants to hire Jude to find the fortune god’s murderer and while Jude has his reasons for declining, he does not seem to be able to stay away from getting caught up in the ambitious changes that some members of the divine and supernatural society have planned for New Orleans.

I did not at all expect to be taken on such an atmospheric, surreal, all-encompassing journey and I don’t think Jude was quite expecting it himself either.

Arcane symbols and geometries, ritual and craft and symmetry. Sacred spaces, messages, prayers, boundaries, traps. The Universe made small, the soul writ large. Circles within circles, all with one purpose: to let the magic in and keep the darkness out.

The City of Lost Fortunes was a true joy to read what with such a beautiful, poetic writing that guided me through time and dimensions as if in a dream. The gods, monsters and mythological undertone, all blew my imagination into a maelstrom of exploration which I welcomed with childlike glee. It was a rich, wonderful mix on this and the other side of life.

The conflict at the centre of this book is not a simple one but rather an avalanche of events that through cause and effect guide Jude towards truths and a fate he never considered.

There is a lot of magic in this book… suppressed magic, magic that has been taken away and magic that has been enhanced. And one way, or another, Jude experiences magic in all forms. But he is not a know-it-all; he learns and discovers and gambles… the game among gods and monsters isn’t over until the final card has been dealt.

So magic is like sex and air, he thought, don’t matter until you ain’t gettin’ any.

Yeah, Jude is a bit of a wise-cracker! I loved his character- his intelligent, analytical mind, his particular view of men, gods, magic. Everything he goes through in this book, and it’s a LOT, he takes it in his stride, without complaint, even when he ends up experiencing an unexpected … ahem.. out of body experience of sorts! As he investigates the murder, and as his very essence hangs in the balance, Jude must remain alert to recognize friend from foe.

“Because I’m starting to think you’ll shit the bed and get us sucked down into the Ninth Circle of Hell.”

“You planning on betraying somebody?” Jude Asked

Regal whipped her head around, her face a mask of fury. “The fuck you just say?”

Jude held up his hands. “Take it easy. I’m fucking with you. You screwed up your Dante is all. Sorcerers like us end up in the Eighth Circle, not the Ninth. Number nine is for betrayers.”

I liked all of the characters in the book- some of them we have all heard about through various tales, but it seemed to me that Bryan Camp is a special kind of puppeteer to bring them all together: angels, vampires, zombies, psychopomps, voodoo loas riding the human bodies, ghouls…  I’m telling you, this book is a treasure and when you’re reading it, you’re the pirate taking a dive into a loot of pure gold.

The City of Lost Fortunes is an ode, a dedication, to New Orleans and its people. A fantastic, imaginative fairytale-like puzzle of gods and monsters, supernatural folklore and myths. It is an incredible venture into a world otherwise unseen to mere mortals, topped up with a generous dose of attitude, unexpected nuggets of wisdom and twists, underlined by an unwillingness to fold in a game with an open ending. Basically, do yourself a favour and read this book, m’kay?!

The City of Lost Fortunes on Goodreads ¦ Amazon UK ¦ USA