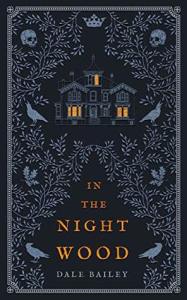 A FOREST. A BOOK. A MISSING GIRL.

Charles Hayden has been fascinated by a strange Victorian fairy tale, In the Night Wood, since he was a child. When his wife, Erin – a descendant of the author – inherits her ancestor’s house, the couple decide to make it their home. Still mourning the recent death of their daughter, they leave America behind, seeking a new beginning in the English countryside.

But Hollow House, filled with secrets and surrounded by an ancient oak forest, is a place where the past seems very much alive. Isolated among the trees, Charles and Erin begin to feel themselves haunted – by echoes of the stories in the house’s library, by sightings of their daughter, and by something else, as old and dark as the forest around them.

A compelling and atmospheric gothic thriller, In the Night Wood reveals the chilling power of myth and memory.

Not going to lie- I totally requested this book based on 2 things: the cover #hearteyes and the title. I am so easy to engage sometimes! haha… General fiction doesn’t often find its way to my reading list, so naturally- slightly afraid at how this was going to turn out. But, In the Night Wood turned out to be one of those books that takes the description “atmospheric” to another level!

Charles and wife Erin are in deep mourning after the death of their young daughter. So, when Erin inherits the Hollow House in England, Charles sees this as an opportunity to start over and start something new. Erin’s forefathers include a writer of a book that many say they would not let their children read and that book as well as the author has been a fascination (of sorts) in Charles’ life. It is so, that Charles approaches the chance at a fresh start with optimism, whilst Erin follows in a daze of medication.

New start it is, yes, but not what one would have expected. Not only is Hollow House and the whole estate shrouded in mystery, the truth of what happened to the couple’s daughter and why remains hanging over the married couple through guilt and blame. With a slight air of supernatural, everything seems to be linked- grief, depression, visions of a horned figure and horrible dreams… Following the good pace upon expertly placed words, I found myself at a shocking yet satisfying ending.

There’s no denying that the writing style is a perfect fit for delivering a story such as In the Night Wood. It made me question sanity, reality and truth. The writing truly, wonderfully pulled me in and delivered an enjoyable, even though a gloomy, story full of characters who are all wrapped in mystery.

In the Night Wood on Goodreads : Amazon : Book Depository

21 thoughts on “In the Night Wood by Dale Bailey”