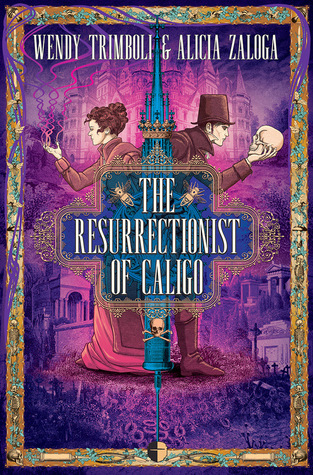 With a murderer on the loose, it’s up to an enlightened bodysnatcher and a rebellious princess to save the city, in this wonderfully inventive Victorian-tinged fantasy noir.

“Man of Science” Roger Weathersby scrapes out a risky living digging up corpses for medical schools. When he’s framed for the murder of one of his cadavers, he’s forced to trust in the superstitions he’s always rejected: his former friend, princess Sibylla, offers to commute Roger’s execution in a blood magic ritual which will bind him to her forever. With little choice, he finds himself indentured to Sibylla and propelled into an investigation. There’s a murderer loose in the city of Caligo, and the duo must navigate science and sorcery, palace intrigue and dank boneyards to catch the butcher before the killings tear their whole country apart.

I was super nervous starting this book as I saw a rather popular blogger DNF it with heavy critique and I thought- shit! This is not good. Not good at all! But, read this book I did, and I ended up enjoying it! 🙂 Just comes to show, everyone’s opinion isn’t your opinion! Give a book a chance 🙂

The Resurrectionist of Caligo brings together the two sides of Victorian-era society: on one side, the foggy nights of cemeteries, paupers and brothels, and on the other side a powerful royalty with possession of magic and intrigue and secrets.

Consigning the dead to science gave them immortality, of sorts.

Our duo of main characters come from different side of tracks and fit into the atmosphere of this novel perfectly. Roger- a resurrectionist- is a young man who wants to be a doctor and on his way up the career ladder, as well as in the name of scientific advancement, supplies the medical schools with fresh corpses fresh from the graves. Sounds pretty grim, but he goes about it in respectful enough manner.

Sibylla is the princess of Caligo’s court. Royalty in Caligo carries magic in the family line and generation after generation of sons and daughters have been born into carefully selected and paired parents. Sibylla is… well, she has her heart in the right place but she didn’t make a lasting impression on me. She just is. Magical, maiden-like, heroine… of sorts.

Interestingly, I can’t quite recall how Roger and Sibylla got involved with each other in the first place, but in the story, we get a sense that there are some undeniable feelings in between the two lingering from the past. Even though Roger and Sibylla were effectively pushed apart a while back, the current events bring the two back to each other’s lives and not in any way either of them would imagine.

The Resurrectionist of Caligo is a story of 2 mysteries: a strange and deadly illness and murder. Our amiable Roger gets the wrap for murdering the women. Naturally. He does have a motive to murder- fresh bodies for the academy, remember? But to the rescue comes princess Sibylla who through a magical ritual is able to bind Roger to herself and thus cleanse him from his crimes. Not good enough for good, old Roger though- he knows something more deadly is ravaging the females on the foggy Victorian streets and he intends to find out!

Whilst we romp through desperate attemps to keep his head attached to his body, Roger also demonstrates the side ti him that proves he would be a good doctor. I could really get behind this character and root for him in all his endeavours. Sibylla, on the other hand, brought with herself the court politics, intrigue and plenty of secrets. So, yes, while I enjoyed this book for it kept me busy with it’s revelations, twists and creepy, gothic magic, it didn’t really blow my wee socks off. Why? Well, some books just pull you in because every single box gets ticked. This one was very close, but not 100%. Maybe because of Sibylla who could have been more as a character? Not that I disliked her, but perhaps she could have shined more? I don’t know… For a princess, a magical one at that, she left me a bit cold 🙂

The Resurrectionist of Caligo is a steady-paced, entertaining read from a time that will certainly capture many imaginations and draw gasps as it unravels another Victorian Easter Egg. From an era where medical science is on the cusp of making huge advancements, the stakes are high as society’s norms need to morph into making sacrifices for the greater good. Where and by whom will the line of morality be drawn though?

7 thoughts on “The Resurrectionist of Caligo by Wendy Trimboli, Alicia Zaloga”