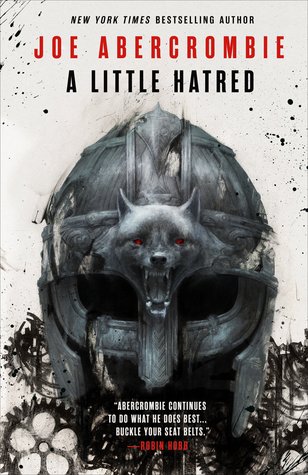 The chimneys of industry rise over Adua and the world seethes with new opportunities. But old scores run deep as ever.

On the blood-soaked borders of Angland, Leo dan Brock struggles to win fame on the battlefield, and defeat the marauding armies of Stour Nightfall. He hopes for help from the crown. But King Jezal’s son, the feckless Prince Orso, is a man who specializes in disappointments.

Savine dan Glokta – socialite, investor, and daughter of the most feared man in the Union – plans to claw her way to the top of the slag-heap of society by any means necessary. But the slums boil over with a rage that all the money in the world cannot control.

The age of the machine dawns, but the age of magic refuses to die. With the help of the mad hillwoman Isern-i-Phail, Rikke struggles to control the blessing, or the curse, of the Long Eye. Glimpsing the future is one thing, but with the guiding hand of the First of the Magi still pulling the strings, changing it will be quite another…

Some Abercrombie connoisseurs tell that A Little Hatred is a bit of a rinse-repeat when it comes to plot structure and characters, and thus being an Abercrombie fan to date, they are now sorely disappointed. So let it be said, that I am not an Abercrombie connoisseur. This is the second title I read by this author and I kind of want to say: whatever, Karen! The story is thoroughly entertaining, a. There is no such thing as completely original in the world of make-believe and art and literature and music, b. And c- how could you not enjoy this story, you moany waffle?!? It was literally bloody fun! But whatever, if you choose to be all prickly about it, have at it!

This review is brought to you by someone who has no prior contact with the characters or their ‘forefathers’ introduced in the First Law World, nor the countries and political setup included. A complete newb here!

One thing I must mention straight away… It’s been a while since author’s words stopped me in my tracks just to admire the thought behind them. It’s been exactly 5 or so years since Mark Lawrence managed that. Now, Abercrombie has shined. Don’t get me wrong, there have been absolutely brilliant books in between, but quotables are quotables, you know?!

The wiser a man is, the more he stands ready to be educated.

What can I say about A Little Hatred? Well – simply that the book has everything a fantasy reader could want. Political intrigue, brutal twists, blood, guts and gore, itty-bitty of them sexy times (nothing swoony to make your eyes roll, I promise!), some luuuuv and a whole pile of a little hatred 🙂

Seriously though, as is the way of wars, and there is a war in this book, the fight is about land. The opposing sides have warriors and leaders cut from cloth fiercer and braver and ballsier than one can imagine. It’s a book with balls where even the women have balls. Cojones in galore!

As you could also expect, the plot has more than a single thread keeping the momentum going… As it is, each thread in A Little Hatred comes with a particular set of admirable, at times questionable, characters around it who may or may not mingle at a point in time… ^^…;may’ is more than likely, of course. But what really matters here is that the plot threads are interesting. They are simply interesting- whether it’s the battles in between the Union and the Northmen somewhere in the wilds or the industrial uprising in an up and coming town. There is conniving politics and ambitious (=evil?) masterminds at play that it can only mean one thing: the dialogue, the progress of the story and the impending twists are a freaking treat!

But, do you know what is the most enjoyable scenario in these grimdark, fantasy titles? It’s the way the princes mingle with the peasants, the holy men with the bloodlusty, the clean with the dirty. I always enjoy the element of black being presented as white and vice versa. This is what makes the entertaining, interesting reading… Because it’s, most of the times, realistic. It’s these kind of characteristics that fantasy writers capture well and Abercrombie captures exceptionally well.

All in all, A Little Hatred was exactly the kind of book that got my heart pumping with everything that it holds in between its covers. Need I say more? 🙂