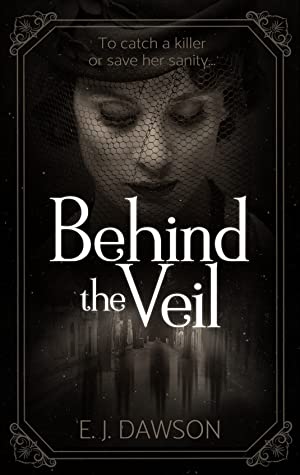 Can she keep the secrets of her past to rescue a girl tormented by a ghost?

In 1920s Los Angeles, Letitia Hawking reads the veil between life and death. A scrying bowl allows her to experience the final moments of the deceased. She brings closure to grief-stricken war widows and mourning families.
For Letitia, it is a penance. She knows no such peace.

For Alasdair Driscoll, it may be the only way to save his niece, Finola, from her growing night terrors. But when Letitia sees a shadowy figure attached to the household, it rouses old fears of her unspeakable past in England.

When a man comes to her about his missing daughter, the third girl to go missing in as many months, Letitia can’t help him when she can’t see who’s taken them.

As a darkness haunts Letitia’s vision, she may not be given a choice in helping the determined Mr Driscoll, or stop herself falling in love with him. But to do so risks a part of herself she locked away, and to release it may cost Letitia her sanity and her heart.

Happy publication day to author E.J. Dawson. Behind the Veil has been released to the world and just in time for readers to pick up their seasonal and Halloween reads!

Please note Content Warning: dark adult themes, death, murder, miscarriage, suicide, rape and pedophilia (those last two are mentioned only, there is no explicit content in the book)

I’m one of those freaks that grabs a book purely because it has a content warning label. Does that make me bad? A psychopath? I hope not. I’m not sure what it is about the darker side of life that draws me in… I, like most of us, have my own past where bad things have happened and I wonder if I am making myself read the horrors to desensitize myself against world’s cruelty or I’d simply not make it otherwise. The horrors are the reminder to always stay alert to all sorts that can go wrong. Anyway…

Gothic Noir… Say no more, am I right?! I’m in. The genre tag itself is enough to make me want to dive in.

I’m glad I did .. whilst the start of the book felt slightly apprehensive and unravelling slightly slower than I would have liked, I was wondering whether I was going to enjoy this after all. But then, boom, something clicked and fell into place. Things got kicked into gear, the intros were done, the scene set and I found myself in great difficulty trying to put the book down.

The story itself is truly captivating. There is a mystery of some missing girls, there is the mystery of Letitia who offers services for people who have lost a loved one, akas not to ones who last lost a loved one through murder. Her past is one full of pain and dark things and I just wanted to know more. As a character, Letitia was instantly likeable and easy to commit to, and I couldn’t remember ever reading a boo set in 20s, nor with a character who did readings using a scrying bowl. I was intrigued in all fronts.

The aspect of someone who is able to contact the dead, for me, as I mentioned, was a unique a concept in a novel and I very much enjoyed it. Not only was it very well done but it definitely brought the air of otherworldly and unsettling to the atmosphere, trying to imagine what it must be like for someone who sees more, a lot more. How taxing it all must be, how saddening, how exhausting, how scary… And also risky. There are snippets of those who have passed on in their final moments and this is how Letitia experiences the other side, as if in the body and through the eyes of the dead. I’m glad every aspect of this potential was used in the novel. It made it feel whole and the supernatural side of it natural and credible.

Physical manifestation of her sensory perceptions was the sign of an overwhelming persona.

As mentioned in the blurb, Letitia develops feeling towards a certain gentleman. I bet some would ask – is love element really necessary in a novel like this? You know, I think it definitely wouldn’t have been as interesting without said love aspect. It’s all respectful and very polite – after all, remember the times this story is set in 🙂 And I very much enjoyed how the evolving romance played to and weaved with the rest of the story. It was a tool very cleverly used allowing for quite a few enjoyable scenes. Alas, I’m not talking about sex. You won’t get swoony, steamy graphic coitus in this book.

But what you will get is your hair risen by other means… I cannot remember a book that gave me the creeps. As I was reaching the end of the book, I was lying in bed, in darkness, all snuggled, thinking this was going to be a homerun and I’d finish the story before falling asleep. No such thing happened because I genuinely got the spooky feeling as things progressed to the finale in the book and I found myself staring into the darkness. That’s when I decided to stop reading, and go to sleep instead, to revisit the story during daylight hours. This hardly ever happens to me, truly. It’s a rare thing to spook me so. Behind the Veil managed to do just that and I mean – bravo!

Finally, here’s what I enjoyed the most reading this book. The dialogue. As you may have noticed, the story takes place in the 20s and at a time where CHOOSING one’s words wisely was of utmost importance to being polite. One could be expressing the height of dissatisfaction and yet the words used in the exchange or spat made it sound like the most pleasant lyrical-sounding small talk. I love it. It’s like one of those Austen novels (of which I have read very little), or the high society in The Count of Monte Cristo, where being offended is no excuse to forget to use the proper titles. Excuse me, sir! I am aghast at your proposal and at the prospect of offending the kind sir, I would dare say I will very much disagree with you… Isn’t it just the loveliest way to say- bugger off, wanker, you’re talking utter bullshit.

Anyway, the dialogue really is important, especially when writing such a historical piece and it felt authentic, and it made me, in turn, a very satisfied reader, indeed.

As you can tell by now, multiple aspects of the book hit the spot for me, and I truly enjoyed my time with this title. And hey, look at that, we’re just in the season for some otherworldly, supernatural, slightly spooky reads! Behind the Veil is easily one I would recommend to your arsenal of pumpkin spice, soft fleece blankie, woolly socks and a crackling fire in the background casting shadows around you. Read it!

Beginning a writing journey with an epic 21 book series, Ejay started her author career in 2014 and has taken on the ups and downs of self-publishing with her fantasy series The Last Prophecy since 2016. At the start of 2019, she put the series on the backburner to write Behind the Veil in 25 days, and signed a publishing contract for the gothic noir novel to independent publisher Literary Wanderlust. Behind the Veil is set for release on the October 1st 2021. She resumed self-publishing a scifi series, Queen of Spades released across 2020 and 2021, as well as signing another contract with Literary Wanderlust for NA fantasy, Echo of the Evercry. Believing in more than one path to a career in publishing, Ejay pursues self-publishing alongside querying traditional publishers with multiple manuscripts.

One thought on “Behind the Veil by E.J. Dawson #behindtheveil #bookblitz @sot_tours #readindie”