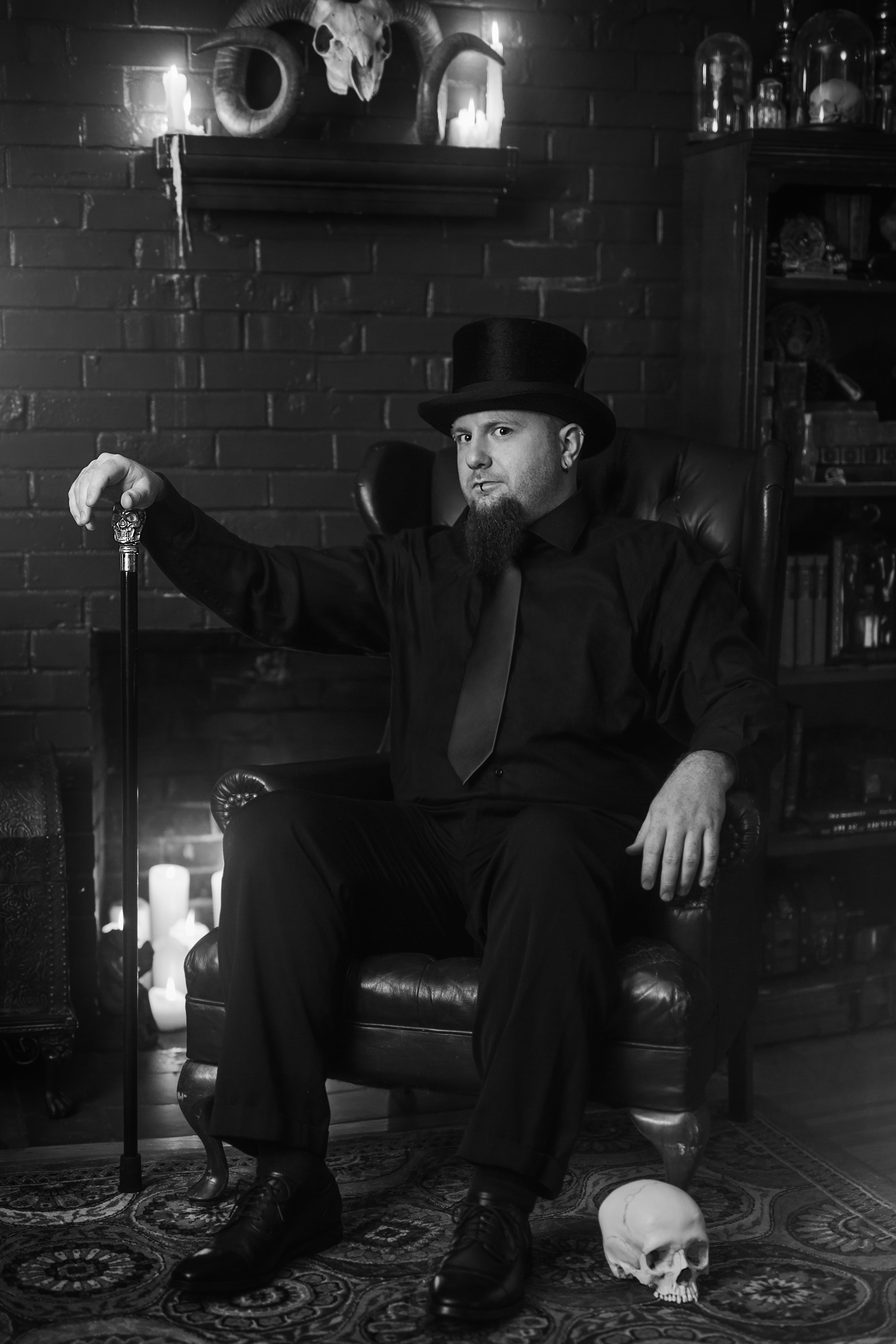 Hello Sean, welcome to Cover to Cover! I do feel sorry for you, a bit, because you were an experiment in relation to this author interview, as I decided to run this Q&A “live” via Twitter DMs over a course of a couple of days. Dear reader, he did splendidly, didn’t complain or veer off course…

As someone who doesn’t know a single solitary thing about you – who are you and what do you do? To make it extra painful for you, haha, reply in 150 words or less! 😀

Oh gods lol well, my name is Sean Walter. I’m a writer of dark fiction and horror and generally macabre stories. I also am a director of Tales in Sombre Tones CIC, an organization trying to make stories and illustrations more accessible to the deaf and blind communities in the UK.

Oh wow, the community interest company is a noble enterprise, indeed. How did you come upon the idea?

It all started when Karen Ruffles, the artist for the book by the same name as the CIC, and I tried to get an inclusive tour together pre-covid. We had some amazing ideas involving 3d printed artwork designed to be handled, braille-printed books, audio and visual stories, as well as art prints. Covid made an absolute mess of our plans, so after a few false starts, we founded the CIC.

I think it’s amazing you do this and I am sure Covid has put a blocker on a lot of plans but maybe it has also driven some changes to take place faster, especially when it comes to accessibility. A lot areas of life had to adjust rather quickly to be able to accommodate for everyone, regardless of their abilities. So, is it fair to say, that you and Karen have a shared interest in the dark fiction, horror, macabre tales and you have decided to work together. Have you two known each other long? Are all of your books co-authored, if I may say so?

Only Tales in Sombre Tones was a collaboration. She mostly did the artwork and I mostly did the writing, but several ideas were bounced back and forth. We met six or seven years ago when I did an open call for macabre illustrators and she wrote me back, and in-person when I was invited to Whitby in the UK for one of their Goth Weekends. We decided then that we wanted to work together, and it’s been a fantastic time doing so. Karen does absolutely astounding, realistic artwork, usually under her handle Drawing in Dark.

Ah, sounds like great minds got together for a creative time. Speaking of you writing, I read that you very specifically dated the start of your writing journey. You were 8 years old! What was the first story and why this specific moment in time? It feels somehow significant…

I didn’t have what you would call a happy childhood. I would spend hours just lost in daydreams. Writing became a way for me to escape a reality that I couldn’t stand and to get into adventures in my own head. Writing them down let me pick up where I left off. The first story I remember writing was a fantasy: swords and demons and bloody war. Great fun, I assure you. By and large, I still write to escape reality, but when I was in my 20s I discovered other people also enjoyed my odd little worlds, so I started writing professionally.

Many read to escape, many write to escape. It’s the imagined worlds, the daydreaming and the fantasies that get many through the days. Hopefully, always, towards something better and happier. So, you started with fantasy, sword fights and demons… What is your current thematic like? Who are the main characters in your stories?

These days I mostly write about the unknown and the strange. The main characters are often just normal people, by and large, with all of their insecurities and issues intact, often put into strange situations. For example, one short story in Tales in Sombre Tones is about a superstitious man being tormented, according to him, by a black cat that happened across his path. Another is about a middle-management corporate type who finds himself on the wrong side of The Barghest: the black dog of northern England. I tried writing a “chosen one” character once, but it felt so disingenuous that it turned into a tragedy all on its own.

So, no vampires, zombies or shapeshifters?

Oh, I do have a shapeshifter, in fact. They’re made of nightmares. Great fun. I quite like zombies and vampires, but haven’t gotten them quite right. I’d want to do them justice.

That shapeshifter sounds like fun! 😀 Vampires… Best quality about them, as a storyteller, in your opinion?

Their longevity, I think. In a vampire, you have free reign to use any setting you please, so long as it makes the story interesting and suits the character. I think a vampire would have to be very sad if they are long lived. Still, they would be very entertaining to write.

Is there a character, a theme, a topic, a cliche you will absolutely not ever write about?

I think any topic, well-approached and researched, can be written about. Whether it should be or not is another question. For example, there seems to be an abundance of people writing stories sympathetic to the nazis in WW2 in the last few years. I think it could be done well. You could have a nazi who was charming, daring, kind to his family, generous to his friends, who rescued stray kittens in his spare time, but it’s important to mention that his day job was still murdering innocent people en masse. I don’t think I could ever take such an overwhelmingly evil group of people who did such terrible things and try to rehabilitate them through a story. The trend worries me.

I wonder is it a trend in the first place because how we generally approach things these days – humour has to be ‘cleansed’, opinions have to be super carefully worded, because it seems like every 5th word is somewhat of a trigger for offence? So, with this, we also glamorize the evil, or soften it up? On one hand, we condemn that which brings about harm, and on the other we try to be utterly politically correct so as not to become a target ourselves? It feels like a bit of a catch-22… And it’s always interesting how fiction reflects the current social norms and trends… How the ethics and morals of the current age reflect in literature… Books are kind of like a historic timeline of collective minds! ha…

I don’t know. I’ve always preferred clever humor to offensive, if that makes sense. Take me, for example. I’m more or less bald. Have been since I was 16. If someone simply made a hurtful remark about my lack of hair, it wouldn’t be funny. Not because it’s hurtful, but because it isn’t clever. If they instead say that they wish for me to turn my head slightly as the glare from overhead lights was blinding them, that would be funny. There’s nuance to these things.

Well put! And great insight! It’s funny how talking to someone can give a certain unique vibe. So, I’m slowly getting to know you through simple questions but the way you’re responding is starting to build a picture in my head about what your writing might be like. Sure, there’s tons to discover and know yet but a start is a start. How much of your real-life personal experience goes into your writing? Is your reality your inspiration, or do you keep the 2 strictly separate?

A lot of my real life gets into my writing, intentional or not. That shapeshifter, for instance, they were based on a dream I had. Oftentimes settings are places I’ve been or imagined or been terrified of in nightmares. I don’t like to use whole people as characters in stories, but I do sometimes take mannerisms, quirks, reactions for characters in my stories. I do draw a lot from legends and myths as well. There are some absolutely astounding stories floating around in history, and I sometimes wonder what some of those characters are up to these days. I suppose everyone writes from experience in one form or another.

What about inspiration from other authors? Is there an author, or few, that you strive to be like, or think of as a literary role model for yourself?

I quite like Gaiman and Pratchett. More or less grew up reading both of them relentlessly. I don’t know if I strive to be like them, but there are parts of their personalities I would be proud of if they were mine. Gaiman’s tact, for instance. Pratchett’s wit and sense of humor in his writing. I’d also hope to be as accessible to people with ridiculous questions as Brent Weeks (I do feel awkward for the ones I sent him that he politely replied to years ago).

Ohhh! Intrigued!… What were the ridiculous questions? I mean, do we have to go scrolling to infinity and beyond on Weeks’ newsfeed? Don’t make us do that… go on, what did you ask? 😀

Ha! If I remember correctly, I had found his FB page (not his public profile, but his personal one) asked him something about his journey to being published, how long it took, a few other random questions that I’m sure he’s gotten hundreds of times before then and thousands since. And he very politely answered some of them, and then pointed out that he had, in fact, already answered the rest on his website, in the frequently asked questions area. I was encouraged and embarrassed at the same time.

Awww… But he pointed you in the right direction nicely and still, I am sure, he appreciated the interest…

He seemed more amused than annoyed, at least 🙂

Why should people read Tales in Sombre Tones, and what do you wish readers experienced reading your books?

I think people should read Tales in Sombre Tones because I think it’s an interesting take on some old legends, some new ideas for things that aren’t often thought of as monsters, it tries to make sense of the senseless, and because it shows friends and allies can be made in the strangest of places. Beyond that, the artwork is absolutely stunning. Some people don’t believe it’s all done in carbon and charcoal. As to what I hope readers experience, I hope they experience some new ideas and emotions. I hope the stories stay with them after they finish reading, not just to haunt, but because of the way the stories made them feel. And I hope they enjoy the time they spend reading it.

Love it, Sean! Thank you so much for your time and giving us a glimpse into your world and books…

So, there we have it… I don’t know about you, but I certainly feel up to something sombre next!