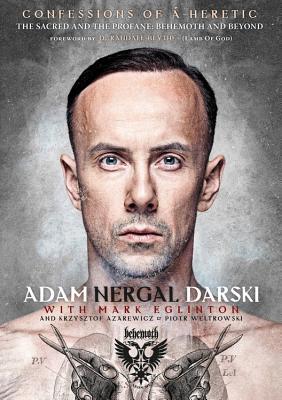 I’ll start off with a story of my own before I tell you what I thought of the book and Nergal himself.

It was 2005 I believe and hoping my memory serves me right. I was graduating high-school that year and had just gotten back the results of my Estonian language mock exam. The exam would have been in the format of choosing one of the many topics and writing about 3A4 pages of an essay. I cannot recall the topic I had chosen or what I had written. I probably have the paper somewhere still. I do remember that I had quoted Remarque. It was Friday and I was on the train with my schoolmates heading home for the weekend. We were discussing our papers on the train and the upcoming exam when a guy sitting not far from us asked me if he could read my mock-paper. I agreed. He took my paper and read it silently. When he finished he turned around to me and told me in my face that I come across very naive. I smile now, remembering it. He was reading Terry Pratchett and I never really was a big fan. Perhaps because my imagination is limited and I didn’t understand the beauty of Pratchett’s writing. Anyhow- myself and the guy had a little battle of words- me of course defending my naive point of views and him to bash me. All fun and games. We parted ways as I was getting off the train.

Inside I was flattered, because the guy on the train was obviously an avid follower of metal-scene and I was a novice. I had recently fallen into the world of metal music a few years back and was still finding my way amongst the great music. As I got home and started reading my paper again, because I really wanted to find the points that made me look naive, I found he had left a little note in between the pages. His contact details.

Intrigued as I was, and having enjoyed our battle of words I emailed him. We swapped a few lines of poems and creations of whatever came to mind. Then, he invited me to Tallinn. To a concert. He said Behemoth was in town.

I met up with him, essentially a complete stranger, stopped by his friends house, another scary looking man in leathers, and a long beard and for the life of me I don’t know why I wasn’t scared! (:

Man, that was my first ever metal concert I went to and it was so raw! The scene was fantastic. The people who had gathered were a joy to look at- there was goths, totally over the top goths and bikers and, ah, colorful crowd. But what really made the night was Behemoth.

They were the epitome of harmony on stage, the definition of synchronicity in motion. I was in awe and couldn’t take my eyes off Nergal, or Orion (Orion became my own little crush- the icon of power).. the drummer who had two people on either side manually waving long branches of something for air conditioning. The sweat was pouring down everyone. The paint on their faces. The sound of their music, what they had produced. In front of the stage, near the speakers it was easy to get shook right into the core of human body. It was all simply tantalising!

A quote from foreword by D. Randall Blythe, Lamb of God vocalist: “For survival to impress me these days, it has to be real, and it has to be done with panache. There are simply too many motherfuckers on this planet for me to be impressed by your mere continuing existence: making it through your girlfriend dumping you without hanging yourself, or a tough week at the office without having a meltdown, is not “surviving”. If I am going to call someone a survivor, that person has to hold on to their convictions in the face of real adversity, and to emerge from whatever crisis they faced with their inner directive intact and their head held high. It helps even more if they are a snazzy dresser, Nergal is one of these people- he survives with style.”

It is now, 10 years later that I read Nergal’s book. Adam Darski. You can’t help but respect the man. He is true to himself, to his views. In the book it feels as if he was put under a spotlight to battle a constant stream of questions and statements about himself, his life, his opinions, of public accusations. And it was a battle he won.

Another battle Nergal won was a fight with leukaemia. The determination with which he describes he went into not losing his life was astounding. There will be no giving up. Attack the cancer with full force and keep sight set on the future, because he was simply not ready to have his life “aborted”.

“Confessions of a Heretic” is in the form of an interview. In the form of a discussion. Adam Darski is a man of many surprises. The way with which he seems to have battled certain situations in his life, the way with which he carries himself and the band through life is inspiring. There are no half measures, but there is the right for freedom. To be an artist and have the freedom to express himself as he pleases. Because it’s art not politics. Art, not religion. Art.

This autobio also drives home the point that you shouldn’t judge a man until you really know them. Yes, Nergal on stage can be an intimidating character. Yes, in Poland he might be labeled as the Devil himself. What you’ll find out though is that Nergal also has the respect of many people- religious, or not. He is fair based on his own beliefs, rational and very intelligent. Nergal is the kind of guy you’d want to have as your friend because you could be sure he would never let you down- and fairly, he expect the same from other people. As he said- “Every pot has two handles”.

Here are some excerpts from the book:

Join 3,615 other followers
Follow Cover to Cover on WordPress.com