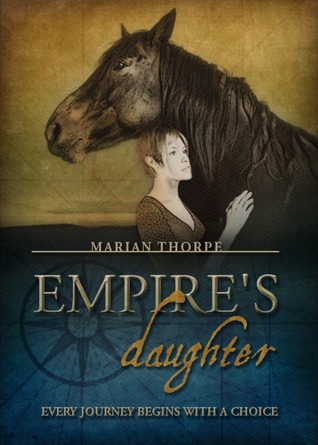 This book…! Now this book is just something special…

This book gives a reader so much more than just one idea, one plot, one theme around strong women. This book will have you witness an Empire’s current, past and future affairs with its history literally changing before your eyes. It was absolutely fantastic!

In short- we are dealing with a way of life where males, from the age of 7, leave the villages to fight for the Empire and women are left behind to live, to manage, to work on food, clothing, farming, fishing. The women live in pairs- this was something that confused me in the beginning- they live in pairs? Like pairs-pairs? In some cases yes, romantically. In other cases just for support and companionship. And yet! During the Festivals where men  are visiting the villages, they pair up with the women to produce offsprings. Meh, produce offsprings sounds so mechanical. Hehehe @ mechanical. Oh-Kay! Moving on!

So, this way of life has been in place for a couple of centuries- the men are gone to the army, the women hold the village life together by following a fairly political way of handling things (meetings, voting, no one speaks out of turn, that kind of stuff). One day, everything changes when a man comes to the village of Tirvan (same happens in other villages) and asks the women to learn how to fight to defend themselves and possibly kill as there is a threat to their lives from a country of Leste. Trade used to work with no problem in between those two, but now Leste wants to come and raid for food. This causes women to change the foundations of their morals, their beliefs and the very foundations of their upbringing as they have agreed for decades that women do NOT kill.

But, as the women meet and vote, most of them agree to learn, even if only for self-defense, to use knives, bows, swords. And so this book’s very being is set to motion- it’s kind of like a survival course and I mean it as a compliment. The story is full of strong, independent, hands on, not afraid of work kind of women. I don’t consider myself a feminist but I truly appreciate the idea that when needed, a woman can take care of herself whether it is hunting, fishing, or wielding an axe (to chop wood of course!) 🙂 In this story, the women, even though having men in the village for a while to help train them into combat, must face the raiding tides on their own as men have the Wall to defend and some will sail to Leste to overtake the threat.

“You have to do this yourselves,” he said. “Were I here, you would defer to my experience and not take true leadership. This way, you must.” He held out a hand. “Fare you well, Lena. I will see you again.”

I too held out my right hand. He took my arm in the soldier’s grasp, his hand at my elbow. I returned the grasp, feeling the muscles of his arm, hard against my hand. “Farewell, Casyn. We will have tales to tell, when we meet again.”

I must say, I really like this book- there’s no excuses, do what must be done and get on with it. Much the way I like to live my own life. Don’t like something? A job or a task at an inconvenient time? Plans not coming to fruition as per wishes of “Princess But-I-Want”? Too bad, sissy, change your mindset and get on with it.

Anyway, as is natural to many things in life not everyone agrees to pick up arms and learn how to fight. Some women from all of the villages across the Empire stick to their beliefs and refuse to stay to defend their homes. So, they are exiled…

This is only the first half of the book. The story evolves so much more… New friendships are being forged, past beliefs are being put to a test. Our main character Lena will end up on a mighty adventure. Not only on horseback travelling through the Empire, but also on a journey to understand her heart, to learn who she is and what it is that she will stand for. Will women once again end up living alongside men? Or will they stay separated as per the old ways and only come together during Festivals for brief mechanical encounters?

A very strong and impactful book! Marian’s first novel, in fact, and I am in awe at how beautifully and well written it is! Unless Marian is a pro at surviving in the wild she has done some awesome research into strategy, and everything involved in real hard work. I definitely recommend to give this one a go. A glimpse into the second book Empire’s Hostage tells me I need to read how the story evolves!

Marian- I thank you from the bottom of my heart for reaching out and providing me a copy! This was a cracking read!