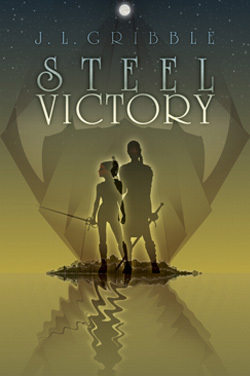 One hundred years ago, the vampire Victory retired from a centuries-long mercenary career. She settled in Limani, the independent city-state acting as a neutral zone between the British and Roman colonies on the New Continent.

Today, Victory is a city councilwoman, balancing the human and supernatural populations within Limani. Her daughter Toria is a warrior-mage, balancing life as an apprentice mercenary with college chemistry courses.

I’m in between ratings with this one. While it was a story that went through the motions with a lot of action and new twists and turns, it just didn’t really pull me in for some reason.

From the get go I was thrown into action, from the get go there was a lot of stuff happening and I felt I needed to be super attentive to make sense of all the past, present and future political, personal and historical arrangements. There was quite a bit to take in and it isn’t necessarily a bad thing. I guess, for me, reading about vampires, wereanimals, mages, British, Roman empire and elves in the setting which I didn’t really understand, was just a bit messy?! Yes, it’s post-apocalyptic, what’s there to understand, but the fact Roman Empire was involved just made my wires get crossed and I couldn’t picture a modern day with the ancient arrangement. I totally accept, it’s my fault and should not cloud your decision making. Who cares what I think.. Really? If the blurb takes your fancy and you see the 5* reviews on Goodreads/Amazon, then heck- this might just be your cup of tea.

Victory had been alive for thousands of years but because my head wasn’t fully in the story I have a feeling I might have missed the point where the environment was really set hence I wasn’t fully involved. The fact there were weresnakes, a werebadger (?), wolves, oh.. yes, humans as well, of course, in addition to the above mentioned characters was just like a big pot of mix and match. Maybe the fact that there were so many different characters had nothing to do with why the read didn’t sit with me. Perhaps it was the amount of characters? I didn’t feel like I got to know any of them in a really deep level and for a while I remember thinking maybe it should be Toria who’s the main character, not Victory? See? I still can’t put my finger on it, cause I was fairly certain I would have enjoyed this one… Go figure. Must be the moon phases or something that are messing with my reading tastes.

Having made those points I would like to say that Steel Victory totally matches the description for a wonderful read for and audience whose perfect book has a mix of paranormal infused with fantasy infused with end of the world kind of stuff. For you, peeps, this will be a wet dream come true. There is plenty of action, plenty of interesting characters clashing, and I can say not a single bad word for the work the author has done in pulling this all together. I wish I would have liked it more.

I am going to rate this book 2 stars, meaning- It was OK!