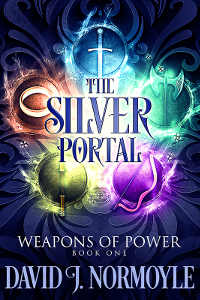 They aren’t the chosen ones.

Only the remnants of resistance remain, and as a desperate last resort, a group of wizards concocted a powerful spell. The magic went terribly wrong, and now only five misfit youths stand between a dark ruler and total domination.

Instead of the weapons of power going to the five chosen warriors, they ended up in the hands of an aspiring adventurer, a reluctant warrior, a street rat, a conflicted pacifist, and a pampered noblegirl. Separated by a continent and pursued by magic-wielding clerics, the young weaponbearers must find each other—but first they must find themselves.

An epic coming of age fantasy bursting with magic and adventure, The Silver Portal is the first book in the Weapons of Power trilogy. Set in a richly drawn world with an intricate magic system, The Silver Portal will delight lovers of page-turning sword and sorcery fantasy.

What kept this book strongly powering on was the fact we’re dealing with 5 important characters instead of one MC. The plot was good and solid as well but the characters get the main spotlight here… They were all from different walks of life, were all unique and were dealing with their own set of inner turmoils. Apart from Lukin…

Lukin is the aspiring adventurer with a sense of humor and need for adrenaline. And beer, and women. He comes across a ring that gives him the ability to read thoughts. Always full of energy and always happy when coming across a tavern and a pretty lady, the boy is full of rusty charm.

Twig is the street rat girl, or rain people as she calls herself. Having to fight rats for a scrap of food, one night she comes across a sword that gives the speed and the power to show Takers their place. She becomes a bit of a vigilante but having lived most of her life in solitude, does she realize what is and isn’t right? It’s a lesson she must learn the hard way.

Suma is the pampered noblegirl, daughter of a Duke about to be married off to another vile-looking Duke. She respects her father, but after having found the battleaxe and having failed at the attempt at showing her father she could be more than just be married off, she learns a horrible truth and finds herself on the road, alone and not so noble anymore…

Simeon is a conflicted pacifist who shuns the ways of his people and instead of choosing a weapon as is required of him, finds and holds onto  a wooden staff he found. A calm and very approachable Simeon has trouble finding his magic… until it matters the most…

Mortlebee is a reluctant warrior from the mountains where the Kale’s scrolls teach the way of a peaceful life and to always walk away from confrontation, yet Mortlebee ends up taking a life after finding the magical bow and gets sent off by his father.

All these characters have their own unique story as they travel the road after having been bonded to their own weapons of power until they finally meet each other and learn the purpose of their newly found weapons and the role they are to play. The whole story has humor, but also wisdom and quite a number of underlying questions and thoughts that should make any reader stop and ponder on for a while. Full of adventure and strong solid plot.

My rating: 4 **** – the writing was good, the pace was OK, decent cast of characters and the fantasy was interesting. The characters are a rather young bunch so even though there are hints at ‘lingering looks’ towards the opposite sex and some action scenes which give a blood drenched mental image, there is no outright/extreme scenes and no foul language, not really. A lot of potential for a mindblowing Book 2 in the series for sure.

The Silver Portal will be published on August 9th, 2016. I received an advanced review copy directly from the author. Thanks!

3 thoughts on “The Silver Portal by David J. Normoyle”