Hello! 🙂 I’m back from my trip to Estonia. I went on my trip meaning to take tons and tons of pictures but I didn’t take many. Other than checking in with my husband from time to time, the phone stayed out of my hand and in hindsight I could have left my laptop in Ireland because I didn’t boot it up once. While I enjoyed my break from all things internet, I did miss yous! 🙂

In terms of holiday reading- I didn’t read at all I think… During travelling and sitting in airports/trains I tend to stare at people and my surroundings and nothing could compel me to stick my nose in a book.

Anyway, if you’re interested, here’s a quick report on what I got up to!

I live in the back end of Ireland and getting to Dublin can be a task. There’s the 3.5 hour train and the 1 hour flight (both train station and airport are 50 min car drive from my house). I took the train and spent the “night” at an airport hotel… well, I had a 2 hour nap and a 2 hour TV session worth €160. Not my smartest choice considering I got to the hotel late and had to get up at 2:30AM but it was nice. Plus the shuttle bus driver was cool and really enjoying his night-time working hours. Go figure.

In the security check my carry on got swabbed for drugs and even though I have no dealings with substances I still found myself thinking- could they actually find something? Anyway, 4AM airport is lovely, everyone is walking around half asleep, or still asleep on the very uncomfortable and cold floors. Once the food court opened though people were stuffing their faces and I was wondering what a bummer it must be to work in an airport food establishment- constantly busy, really unsociable hours… Well done to those folks anyway. 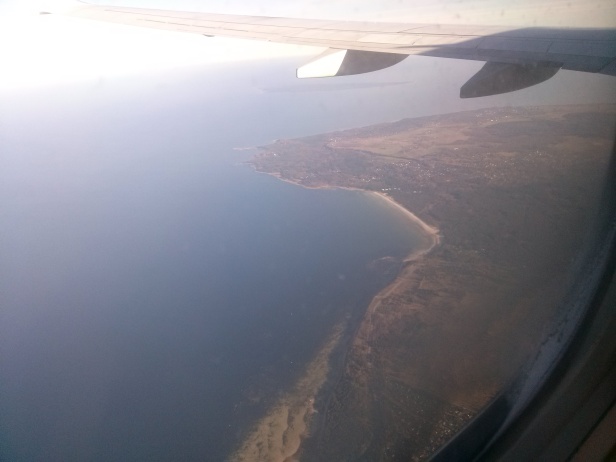 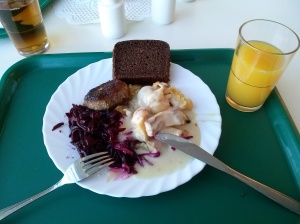 Landing in Tallinn, Estonia was wonderful if somewhat cold and my nephew, sister and mom came to pick me up. What followed was a full day of shopping, started by a lovely meal. My sister always finds the proper homely meal places in every town in Estonia so no Maccy D’s, Statoil hotdogs or other fast food chains for us. My first meal back home was nice and filling and consisted of oven spuds, flour and milk based sauce (it’s my favorite), marinated beetroot salad, pork burgers and proper black bread. I never realized how much I missed black bread. I realize this doesn’t look like a meal in a Michelin rated restaurant, but nothing beats a solid dinner that reminds you of your Ma’s cooking.

Every day in Estonia was me eating, everything I could get my hands on. I gained a much needed 2 kgs and my stomach was trying to pop out of my pants. It was wonderful. Mom had made a big pot of cold potato salad (smoked sausage, garlic marinated gherkins, apple, egg, mayo, sour cream, spuds of course) and I ate the whole lot in two days. I walked around groaning over my stuffed belly, only to go back to eating every hour or so. What a feast! 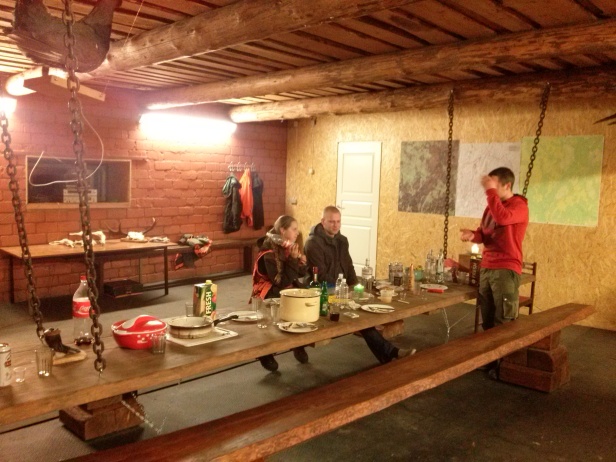 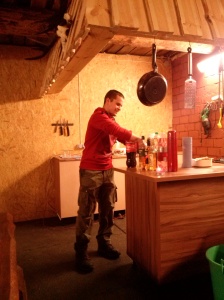 My nephew’s 20th birthday was celebrated in the hunter’s lodge or which used to be a cowshed now converted to a clubhouse. In the picture above is my niece with her BF and my nephew, others had stepped out at this momentor simply gone home by this stage so I snuck a photo or two.

I ate moose fillet-steak (freshly hunted that day), more potato salad (difference being that instead of gherkins my sister likes to use non-smoked sausage and fresh cucumber instead of gherkins), bbq-sausages and lots of cake (which was covered in roasted and sugared oats).Vodka, rum and whiskey was plentyful.

Before I go any further, and before people start giving me smack about animal welfare and how hunting is bad, let me stop you right there. Estonia is not one of the countries where hunting is done for the sake of trophies nor for sport but rather it is done for putting food on families’ tables and animal control. In fact, because Estonia is still very much a self-sustainable culture, a family could easily live without having a paid job because most grow their own vegetables and fruit and if there’s a hunter in the family, they’re also sorted for meat. No need to buy anything from the shops.

Heavily regulated and controlled by the environmental department hunters follow exact protocol of what animal is allowed to be hunted at a certain time and how many per hunters’ club (1 animal, 2 or 3). One can’t just go out on a Saturday morning and shoot whatever runs across their path. There are courses that need to be taken and exams to be passed for a hunter’s license. I understand some people condone this way of life- I have heard it all, read it all and I am willing to take your viewpoint on this. I can’t promise I will change my mind but let’s agree to disagree. 🙂

One of the evenings I spent with my brother we had sauerkraut and blood sausages accompanied by pepper vodka and beer. It doesn’t look the most appealing but it’s absolutely yummy! 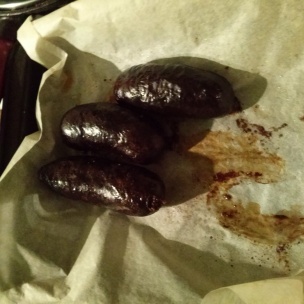 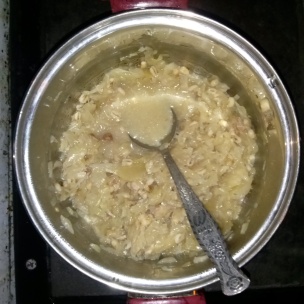 We also snacked on some dried banana, peanuts and well.. it’s what you call trail mix I guess, but I had to take a picture of the packet because it was sooo cute. Navitrolla is an Estonian artist and his works are just trippy, cute and surreal. Check out the gallery in his online shop here… and come tell me if you think his works are crap.. I bet you can’t! They’re just awesome! The guy is just obsessed with mushrooms and animals… 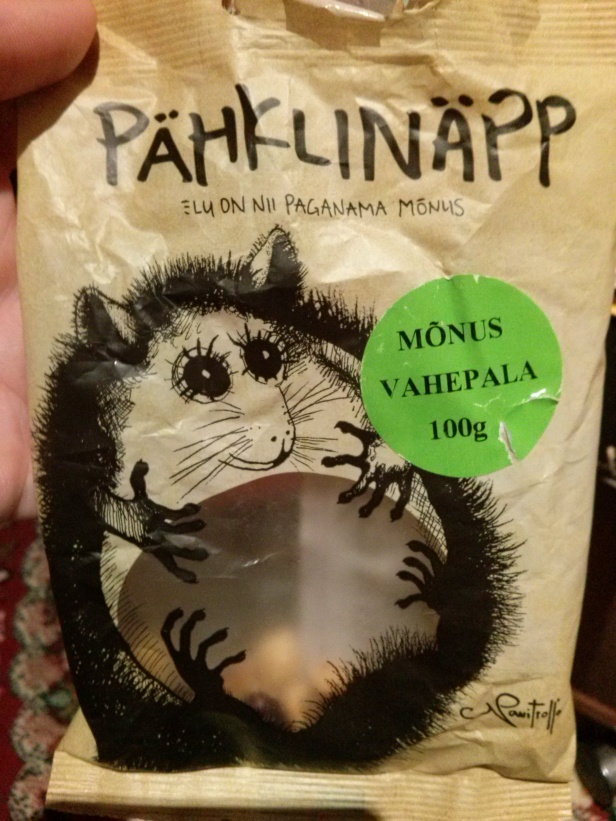 I met my granny, my brother’s girlfriend, my best friend’s 3 month old baby Jasper and a couple of lads I grew up with. My niece took me for a drive in her boyfriend’s 1984 V8 3,6 litre automatic Audi… the tarmac was peeling! It was quite a busy trip in terms of going to visit people but I also spent a lot of time at home with my mom and it only took 2 days for me to get addicted to Turkish soap operas they’re showing on Estonian TV. Sure, the dialogue was so cringey and awful, but man, do the Turks know how to inject drama!

My sister is a multi-functional housewife. In addition to taking care of a large farm filled with horses, dogs, sheep and a husband that can’t make a fire, she also takes care of our village graveyard. My mom usually helps her out and this season’s job is raking leaves and cleaning all the graves that don’t have people visiting to do so. There was a lot of morbid jokes from them both during my stay over so I told them how happy I am that winter is coming and they’ll spend a bit less time at the graveyard! 😀

I dug around in old pictures and among other very interesting black&white’s I found a couple of my dad back when he was in the Russian army. Army service is compulsory in Estonia. Boys will be molded into men… at least that’s the saying… it has it’s pros and cons I guess… but.. meh… that’s a whole other topic… 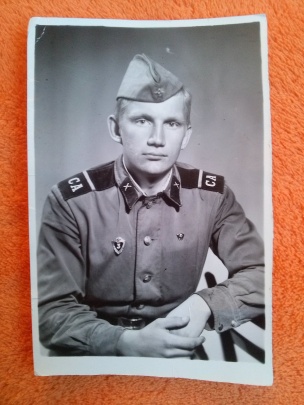 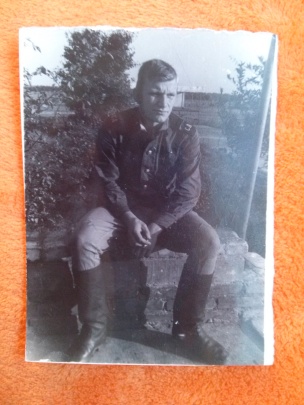 I got back to Ireland quite OK and without a hitch. 3 days before my return flight there was a bomb threat called in at Tallinn Airport. Third time this year.On better news however I got to experience this year’s first snow on the morning of my flight back to Ireland and it definitely lifted my spirits. I love snow!

I discovered I really like the airport. It’s just supercute and colorful. A lot of the chairs are covered with designs and patterns which originate from the national folk-clothing and there are many patters for such a small country… and here is one of the cutest departure gates ever- a walk into the forest…

This post has been long enough and slightly dry report of events with possibly TMI. As you can see, nothing really exciting happened apart from me stuffing my face and meeting people.

So now, I must get back to giving love to the books I need to review and … it’s great to be back online with you all again! 🙂 I have a fresh review and a guest post lined up for you guys!