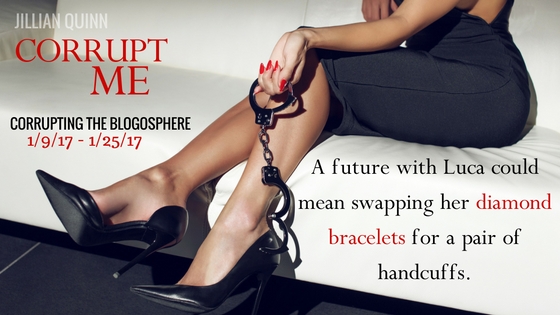 As part of Corrupt Me Blog Tour, I am excited to reach out and entice all of the romance readers out there in the blogosphere. Have you already heard about Jillian’s debut mafia themed book Corrupt Me? Hop on board and get corrupted! In the words of Ozzy Osbourne: “ALL ABOARD- hahahahaha!” (the song is ‘Crazy Train’, btw) Corrupt Me is available to be purchased in paperback and the ebook will be released on the 17th of January through various book retailers (links at the end of post)

For the Blog Tour stop today here at Cover to Cover, I requested a Guest Post from Jillian. Whether you love or loathe romance, I recommend reading this very entertaining post with tips around creating a bad boy character.

I think it’s safe to say that most girls want to read a book about a sweet boy who will sweep a girl off her feet and they live happily ever after. Some might even prefer a rags to riches unrealistic story with a fairytale ending. Both of these sound like cute stories, right?

While the high school jock falling in love with the nerd is a popular storyline, there are plenty of readers, like myself, who want a bad boy. But bad boys are not one size fits all. They come in all different shapes, sizes, and flavors. It’s the bad boys that get the blood pumping and the juices flowing.

When you read a book about a bad boy who was tamed by that girl—you know, the one girl with the magic vagina that ruins him for all women—you start to root for them as a couple, especially if the characters are well developed. You secretly (or maybe not so secretly) cheer for the couple in hopes that the disturbed motorcycle gang leader or the Mafia hit man will end up having a heart of gold. Maybe they can even get matching tattoos and guns.

The DO’s of creating a bad boy character

Just because your bad boy is a cartel gunrunner who snorts blow off the bathroom sink or a famous athlete who offers his goods to the world, doesn’t mean he has to be unlikable. If you can root for men like Michael Corleone or Tony Soprano, then they are proof you can still fall for a bad boy.

Besides, you want a man that takes care of you, not one who scratches himself on the couch for an hour and asks you to make him a sandwich. That is not sexy. It’s more like a nightmare, which is why a lot of women have to get their bad boy fix in novels.

But, there’s more to a character than looks, charm, and the size of his package. Oops, I mean wallet. He has to have a big…heart.

The reason Luca Marchese resonated with so many women who read Corrupt Me is because he’s not what he seems at first glance. I wanted him to appear to be your stereotypical bad boy character, but Luca is a major mama’s boy. He loves his Ma, and so do his twin older brothers who you will see in the next two novels in the series. Yep, there are twin hotties who look like Luca in the series. Because of Ma, Luca knows how to treat women, even if he doesn’t show it until after he has rekindled his relationship with Isabella Rinaldi, his childhood sweetheart. These boys will melt your panties…and your hearts.

Based on the current romance books on the market featuring strong leads, it’s a fair assessment to say that most of the bad boys either play a sport, ride a motorcycle, or belong to the Mafia or some criminal gang or organization. Crime is hot and so are athletes. Sex with any of these guys is just HOT! There’s something exciting about hooking up with someone you would never meet in real life. You can meet Bob the IT man any day of the week, but you’re not likely to run into Jax Teller or Tony Montana in the food store. But wouldn’t that be nice?

The DON’Ts of Creating a Bad Boy

It’s nice when you get everything I mentioned above in a book boyfriend, but he needs to be likable. You can forget that he smuggles drugs or makes you say hello to his little friend when he has some redeemable qualities. And maybe you’re like Kay Corleone and actually believe he’ll legitimize his business for the right girl, but if he falls into any of these categories, you’re heading down the wrong path.

Thank you for having me on your blog. I hope everyone enjoyed this guest post.

You may have already come across my review for Corrupt Me, but if not- here it is again. Romance isn’t usually my automatic go-to genre, but because I like to keep my options open, I was excited to give Jillian’s book a fair chance. I was blown away by the female character. I believe I told everyone to keep Luca because I was willing to start swinging the bat for the female team.

Are you ready to be corrupted? 🙂 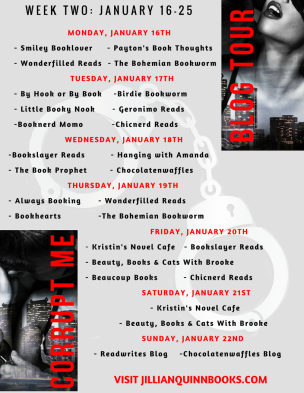 Here are all the links you need to get yourself acquainted with Luca and Izzie. Don’t forget to check out the book on Goodreads and the author website- it seems a mass-corruption has already started and there are news of more heartthrobs being released into the wild soon! 🙂

Corrupt Me is on sale now from these retailers:

Corrupt Me by Jillian Quinn on Goodreads