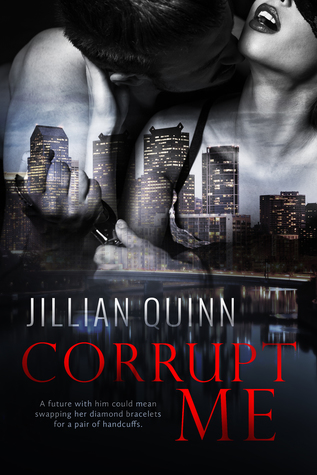 Izzie Rinaldi has everything going for her. All she has to do is make it through her senior year of college, and then she’ll be off to law school, one step closer to assuming her position at the head of her family’s empire. After a chance encounter with the campus bad boy, Izzie can’t get him out of her head.

Luca Marchese, the smooth-talking son of the most notorious man in Philadelphia, is used to getting what he wants. He hasn’t forgotten the girl he knew as a child, and now that he has Izzie’s attention, Luca will stop at nothing to have her.

Luca’s defiance of the law turns Izzie on more than she cares to admit. She wants Luca to corrupt her in every way possible, despite his reputation as the king of one-night stands. Their attraction is undeniable, but their desire for one another isn’t enough for Izzie to overlook visits from federal agents and the potential ruin of her family.

Linked to Luca and a criminal underworld, Izzie discovers she’s more like him than she thought. But a future with Luca could mean swapping her diamond bracelets for a pair of handcuffs.

*Corrupt Me is a standalone novel that is the first book in the Philly Corruption series.

Let’s get the formalities out of the way first:

My thanks to Jillian, Netgalley and Penn Publishing for allowing me to read&review the ARC of Corrupt Me.

The expected publication date for Corrupt Me is 17th of January 2017– mark it in your calendars New Adult and Romance fans and Break out the red panties! ( McGregor, don’t sue me, please!)

Also, there is a blog tour happening from the 9th – 25th of January. Yep! And one of those stops is here in this very blog… I promise, it will be interesting, fun and maybe even educational? 😉 So, watch this space! Finally, for news of upciming books and to find out more visit the author website HERE.

Finally-finally, I would like to say that even though I am acquainted with Jillian for some while now through book blogging this connection has in no way tampered with my thoughts about the book.

When I do occasionally read and review a romance novel I can be a bit moany. The spineless women always in the clutches of arrogant, rich assholes… come on, who enjoys the constant ‘damsel in distress with wet panties’ all the time? I don’t. I had high hopes for Jillian’s characters and I knew she could deliver!

Isabella Rinaldi is one powerhouse of a woman with a level head and firecracker personality. Her Grandfather is a billionaire businessman and Izzie is to take over the empire. As for other close family- she hasn’t been so lucky with a loving Mother or Father. Izzie is smart thought, she knows how things work- either with relationships, friendships or business. She has balls of steel when it comes to dealing with the feds and when given a chance of having a family her loyalty knows no bounds.

Luca Marchese… heh! Youngest son of a mafia boss, Luca wants to live a life on the right side of law. He’s a man though so obviously he has his weaknesses as well! Confident, looker and hooker- why have the command over crowds of men and women when you can’t let the bad boy out to play every once in a while? Yes, he might be a player, but when one woman with Italian insults manages to steal his heart, we see the soft gooey insides of this guy.

I can easily see how Luca will win over readers hearts… but in this case I am willing to switch sides for Izze, though! Y’all can keep the guy! 😀

Izzie’s and Luca’s relationship was interesting to follow. Their families know each other from way back but all ties were cut and really, it’s better things stay disconnected… but…. when they run into each other again, crack-pop-sparkle. Izzie won’t fall at Luca’s feet straight away though. I truly enjoyed her self control and rejections no matter how much she wanted him to corrupt her. Hormones galore! The exchanges in between them made for some great scenes… grab your popcorn and see how it plays out.

Overall: some hot and heavy scenes, family and Italian cooking, Italian cursing and mafia involvement. Where there’s mafia, there’s feds with their photograhic evidence! Mix in money, gambling and easy women and Luca won’t be able to keep his pants up! I recommend this book to all NA/Romance fans, you’ll be sure to get your kicks from this book with strong female character, hearthrob male and some unlawful activity!

I am beyond thrilled to finally read a romance novel with a kickass female character and that alone deserves a high rating! What I especially liked about her was the fact she didn’t turn into a blubbering, sobbing mess when she found Luca with his ding-dong inside some campus pu**y. He wasn’t cheating, and she just commanded the whole situation! Sure, the scene was awkward as hell but it was also mega funny! Even though there was sex scenes, they weren’t repetitive and only occurred when the time was right. I also liked how well the family dynamics were portrayed and -jeeezus- Jillian, you made me crave for pepperoni pizza with how well the pizzeria scene was written!

My rating: Hold on to your horses now… I’m rating a romance book 4.5 stars! This is my first ‘and a half’ rating ever… Why no 5? I didn’t really care much for the epilogue, I understand how for the usual NA/romance fan it is a ‘must’-> tie it all together and inform readers where everyone has ended up years down the line but for me it matted the fierceness of the overall experience. *my hands up* while it makes the normal woman’s heart melt, it was cheesy for my inner Ice Queen 🙂

So… there you have it… Hell might just be frozen over this very moment, but I actually truly enjoyed this NA book… I… I think I might have been corrupted! 😉

31 thoughts on “Corrupt Me by Jillian Quinn”

🌡️🌡️🌡️
Words With Friends personal best - 79 points for gizmo ☺️👍
You can hear the 🐝🐝🐝 busy in linden trees.
Of Honey and Wildfires by Sarah Chorn... What an emotional ride this #fantasy title is... #indie