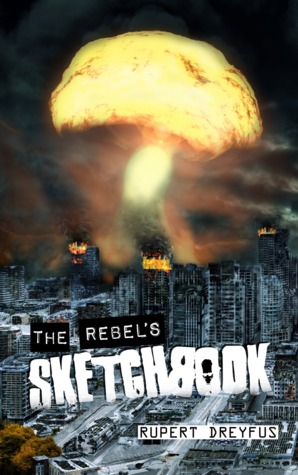 Maniac world leaders; talentless boybands; Westminster politicians; social media idiots; zero-hour contracts. Rupert’s first collection of short stories uses transgressive fiction, black comedy and satire as a weapon for shooting down all of these and more. Keeping the spirit of rebellion alive, The Rebel’s Sketchbook is set to become one of the most controversial and challenging releases in a generation. Awarded one of the Morning Star’s books of the year 2015.

As humanity evolves, it seems the direction we are taking is one of destruction driven by hunger for profit. This is the world we live in and either we take it lying down or we rebel against it.

There are various means to express rebellion, and Rupert Dreyfus uses his writing skills to paint the world’s problems in black and white, covered in multi-colored polka dots. After all, political drivel is just political drivel- it’s dry and it’s mostly lies. This is when the polka dots come to play as Dreyfus manages to pull along the thickest of ditches by wrapping any of society’s blinding issues into the outrageous and entertaining. He then proceeds to hand it over in an easy-read, relatable manner so you can take those layman terms and feel a spark awakening in you as you begin to see the bigger picture of it all… It’s not just about trying to shock you, it’s about taking a snippet of reality and mirroring it back with impact.

Your gravestone is marked with the six saddest words:

Social Media Drained My Soul Away

And they all mourn your loss at a budget funeral service while updating their social media statuses on mobile phones apps. And in years to come nobody remembers any of your updates; even those updates that you deep-down believed were going to bring about world peace. The Digital Age is more disposable than nappies and just as full of shit.

The Rebel’s Sketchbook is a collection of 13 short stories, all connected with some minor details gluing them into a linear order. The full spectrum of the system’s disease gets addressed as you read about pop celebrities, world leaders, mafia, aliens, drugs, anarchists, trying to stay alive, trying to get laid, social media. A well-oiled,”working-without-fault” system that we currently find ourselves in. The collection is not glorifying a single thing… it’s all dark, hopeless and stinking.

Covering it all is the rebellious message which resonates throughout the collection against the same shit system, and yet each story has something unique to them. They’re challenging and powerful in their delivery, they’re full of characters ‘as colorful as the Lord’s zoo‘ and they all have one thing in common: the human condition which is at the same time a virtue and a curse- the blind obsession derived from selfish, personal gain.

This was the overall message I personally chose to take away from the collection… no matter how rich or down in the dumps, we’re all to blame sometimes because we can’t see further from our own noses. However, as we find ourselves at Destination Rock Bottom, the human mind knows no bounds… the decisions we make during critical hours are unbelievable. As such I enjoyed the creativeness Dreyfus enabled for his characters throughout the 13 stories and it made me realise that sometimes doing something stupid is an attempt at survival. Sometimes you win, sometimes you lose.

It makes me wonder, if it is the unpredictability of life that is gradually taking us closer to the final stop. It is starting to seem that whatever the masses are told, whatever next raging fashion statement is brought out- it is the only thing our ‘intelligent’ human minds can fathom thus completely losing the sight of the bigger picture? Anyway…

I hope some of you can remember my review for Prezident Scumbag! by Dreyfus… it was one helluva crazy ride. Do read it! The Rebel’s Sketchbook saw the light of day prior to PS! and it was interesting to compare these two works. Apart from one of the short stories acting as the prelude to PS!, there’s nothing repetitive. *scoffs* I guess when your inspiration is this vast world which continues to surprise you, Dreyfus will never run out of material. Not to mention that the ‘shock factor’ is well and truly a signature tool for Dreyfus.

As promised, The Rebel’s Sketchbook delivers this collection of transgressive fiction, black comedy and satire to the full of its meaning. There are no limits, no stops pulled, at taking the reality and returning it to the creator to have a good long look at itself. And really no one is safe in this collection of stories as the finger will point at each and every one through dark humour. You know, the dark humour where everyone laughs but deep down we all know that it’s the truth?

PS! I am hoping this is not the last you’ve heard of Rupert Dreyfus on Cover to Cover… 😉

20 thoughts on “The Rebel’s Sketchbook by Rupert Dreyfus”

This was... Okay, I started reading #withoutmerit in the evening and at midnight I was still like 😳 and I had zoomed through 70% of the book. I made myself go to sleep because of the youngling waking up in a few hours... But, so good. So messed up, so tragic and sad and wonderful and messed up to high levels of crazy. Loved it!
Sinilill.
This will be my first #pratchett
On this day. 2012. Ireland.