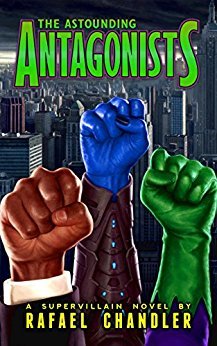 Dr. Agon, a megalomaniacal inventor with an arsenal of lethal gadgets. Motley, a wisecracking jewel thief with nothing left to lose. Chillpill, a cryogenic drug lord who just wants a normal life. Baelphegor, a demonic psychopath with an ugly score to settle.
They’re the most dangerous supervillains on Earth, and they’re about to pull off the perfect crime. There’s just one catch: if they succeed, they might accidentally save the world.
From the skyscrapers of Apex City to the gates of Hell itself, the Antagonists are pursued by violent superheroes and billionaire vigilantes. But as loyalties are tested and old hatreds are rekindled, the line between friend and foe begins to blur…

*My thanks to Rafael Chandler and R&R Book Tours for the review copy in exchange for an honest review.*

Don’t you just love it when you discover a shining gem of a book? I do! The Astounding Antagonists is a fantastic read. It’s a supervillain/hero novel and there’s probably nothing that a hardcore superhero fan wouldn’t expect BUT Rafael Chandler has a knack for creating top-notch characters and flowing dialogue and action, guaranteed to win the reader over.

25 years ago, the Prisms, which turned normal people into superbeings, had landed all over the world. Now, Verdict, Facet, and BioTech spent millions tracking the remaining Prisms down and bringing them back to the USA. A monopoly on heroism.

The blurb gave me the rundown of the main characters in the book, but it didn’t prepare me for how much I was going to enjoy each and every one of them. I really came to like these supervillains for their distinct voice and sense of humour (or in some cases the lack thereof). Motley was probably my favourite- a 40+ nimble thief, she could crack some serious wit and I found myself cackling on numerous occasions. Admit it, nothing beats a book that is peppered with a good dose of humour.

Truly, just take my word- the supervillains are awesome! What makes them even more joyful to follow in this novel is the fact how they still have their past, they still have their specific brand of moral code and more importantly, they had that important and valid internal conflict, each of them, which at times made them act in a surprising way.

Take Baelphegor for example, he’s like one of the most horrible supervillains out there. Putrid is the word, in fact, with which people describe him and his actions and yet he made me go ‘awwww!’ on a couple of occasions. Seriously! Mindbender…

And Dr Agon, this super brainy inventor who has nothing but his gadgets to fight the superheroes, is literally socially and emotionally inept and yet he LOVES his partner Gideon and he maybe, in a way, allows Helen Damnation to draw the moral lines in the sand which they will NOT cross as they take the fight right to the superheroes door.

Speaking of Helen Damnation! Wow… Yes to this character! A hundred times yes! And I am so sorry but I will not want to say anything at all about her, because you need to READ her to love her! I loved her. Everything about her. So hard! Her background, her strawberry smell, her looks and even the way she spoke. #girlcrush

Now come on, let’s go into outer space and fuck everything up like a couple of supervillains. When we’re finished, they’ll have to invent a bunch of new laws just to figure out all the crimes we committed.

The plot of this book is *boom*… there’s a whole ton happening and all of it wrapped in plenty of action. Truly, the overarching mission of the book which counts the reader down to the ultimate face-off in between supervillains and superheroes with the supporting side stories themed around love and friendship kept me amused from start finish. It was rich! In so many possible ways… And guys, when the line in between who was actually good or bad started to blur, I was even more invested!

Can you tell that I really enjoyed this book? 😀 It’s a bleeding gem of a read, oozing all sorts of cool and high tech! The entertaining, purposeful dialogue and the sass that the author managed to surprise at the most perfect moments coupled with concise action scenes seriously tingled my bookworm tastebuds. I highlighted so many, so many-many dialogue exchanges in this book I wish I could share with you because they are just so entertaining, but I can’t. I do not want to take away the element of discovery from you.

All I can say is this- if you like stories with superheroes and supervillains then this novel is simply one not to miss. I swear you will regret it if you won’t read it. To those of you who read Rafael’s Mask Beneath Her Face– remember how entertaining it was and what the characters were like? Well, you will receive the same courtesy in The Astounding Antagonists– a solid, solid, solid novel! 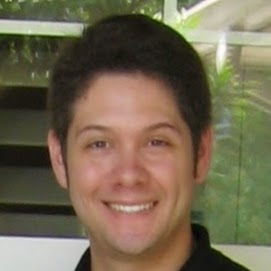 11 thoughts on “The Astounding Antagonists by Rafael Chandler @RafaelChandler”