I enjoyed this one, didn’t I! This book makes unputdownable a perfectly legit word, yes, yes. 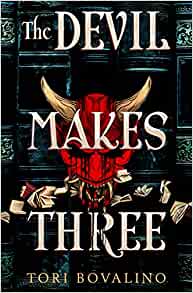 The devil seeks his due from two unsuspecting students in this YA horror novel for fans of The Library of the Unwritten and VE Schwab.

When Tess and Eliot stumble upon an ancient book hidden in a secret tunnel beneath their school library, they accidentally release a devil from his book-bound prison, and he’ll stop at nothing to stay free. He’ll manipulate all the ink in the library books to do his bidding, he’ll murder in the stacks, and he’ll bleed into every inch of Tess’s life until his freedom is permanent. Forced to work together, Tess and Eliot have to find a way to re-trap the devil before he kills everyone they know and love, including, increasingly, each other. And compared to what the devil has in store for them, school stress suddenly doesn’t seem so bad after all.

I started reading and thought, oh, this is going to get quite mushy with lurve. I mean, we had the girl who ends up in a privileged environment whilst being the odd one and financially broke one, and we have the (seemingly) popular guy who’s hawt and cute and digs a library-girl. So, yes, there’s the library setting… for some of us, oh so very romantic, the ultimate dreamy place to be for all sorts of shenanigans…And you know, it kind of sets the trope bells ringing…

This title isn’t at all the weird and clumsy hormonal teenage romp with some knife wielding weirdo chasing for blood. Tess is an awesome young female character. She has had to brush up her act and work like a warhorse to support herself and her younger sister. She just gets on with things and I liked that. So, yes, Tess is a bit of a hardass and Ice Queen but also funny, resilient and likeable.

Spotlight on Eliot! … Eliot is…a…ha, suck it, I won’t tell you, because that would be a spoiler. Trust me when I say that the blurb doesn’t cover the HALF of it! What I can say, is that Eliot is also likeable. Not at all a bully that has ‘redeeming qualities’ nor an overly confident, ‘hides pain by being macho’ kind of dude. He’s smart and caring and no BS. A joy to read.

But then, there’s three. The Devil. And, you may ask, well, how the devil did THE Devil get to be freed by our 2 sensible, very likeable characters and HOW in Hell’s Bells are the 2 young ones going to defeat an ancient evil, and oh my god, who’s going to die????

Yeah, well, other than the blurb I really shouldn’t drop all the secrets this book carries. I was positively surprised by the turn of events. You know the way cats go all mega-pupils when they see something they want to go at? Yeah, I had those eyes as I got hooked into this fast paced story. I wanted more, more, more!

So, anyway… This book is the epitome of outstanding YA Horror. We have the young adults, we have the questionable parenting by all sides, we have the love because jesus christ almighty, a young one simply does not exist without falling in love, and as for the horror- well, there’s plenty! In fact, and I am reluctantly admitting this, I got spooked out. I was reading late into the night and I started feeling particularily creeped at some stage – and that NEVER happens to me – so.. I actually stopped reading, cuddled my kid close and went to sleep. The fact I got creeped out had nothing to do with mention of blood or whatever monstrosity you can conjure up, no. It was just that a particular scene got so eerie and the author did a hell of a good job and cripping me. That’s a win, if I ever saw one.

And, just because I have been skirting around the topic – I mean… I can’t really tell you due to spoilers… but, there’s so much more to the book than the horror element. The characters have been perfectly inflated from one dimensional dumb-bells looking to get killed in a library to three dimensional human beings on paper with serious problems in their lives. And god damnit, the Devil is all just a cherry on top of an already steaming pile of crap.

Yeah, so.. I enjoyed this book. It’s super. It’s entertaining, it’s fun. I could not put it down and even though stuff happens and some folk die, I finished this title with a great sense of satisfaction. Time well spent!

Join 3,607 other followers
Follow Cover to Cover on WordPress.com