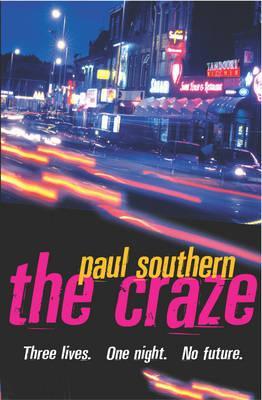 Terence looked up from the window ledge where he was sitting. His slitted eyes and cobra’s hood seemed poised to strike some venomous retort. He hated Pakis, preached their destruction with the messianic zeal that only Gorton’s white-trash council estates could harbour. His head was almost clear, certainly clear of anything like conscience or intelligence.

If ever there was a thrilling crime filled fast paced book one had to read, this would be it. Edge of the seat stuff, this is.

Manchester, scum of the earth characters, racism, family honors, death and drugs… Did Paul Southern succeed in showing us the (a possible, real or unreal) underbelly of Manchester? Boy, did he! Want to know the recipe?

Mix all together, sprinkle with drugs, add some heavy breathing for sound effects and rub it in the stink of fear. Result? Caboom!

Mind you, none of this would have come together if it wasn’t for Paul’s masterful, I could even say lyrical, writing style. Such ugly things presented to the reader in such pretty ways! It’s not tragedy nor sacrilege- it’s skill!

She was found on the tracks: burned up, tongue cut out, a finger removed. Who was she? 24 hours earlier Shazia Ahmed was leaving Manchester, but a chance meeting and a phone call and she finds herself in the underworld where life is cheap and usually very short. Jamie Farrell already knows this truth: that the drugs and crime will tip over into murder. His father’s in Strangeways and he’ll be joining him. But he can’t give up the deadly game that is The Craze. Dru Round thought his big day had come: no more cheap drag acts and furtive sex in the backs of cars. A new dawn of TV fame beckoned. But he just needed that extra score to make things work for him-Three lives – one crime – the Craze.

Yes, the opening quote of this review exhibits a narrow-minded racism. But, don’t worry, there is balance, for the hate is also a two-way street.

He cuts his way through the crowd like a shark in a clear sea, eyeing the shameless white girls with their puffy, pink breasts reddening in the sun. And their vulture-faced boyfriends with their bloated potbellies. Such cruel faces, he thought. Such an unseemly mass of humanity. And to think this lot ruled India. How the hell had they managed that?

It is absolutely shocking how this book doesn’t have more reviews On Goodreads, more fans generally, more shiny star ratings.

Many thanks to Paul Southern who provided me a paper back copy! I never knew I could enjoy a crime/thriller/mystery so much! 🙂

Get your copy on Amazon UK

The best part of ending this review? Not only was the book thrilling, but in a few days I will publish an interview with the author. Who is Paul Southern, you may ask? Come and find out on April 1st when I will also be bringing you news of a new book coming to this world.

12 thoughts on “The Craze by Paul Southern”