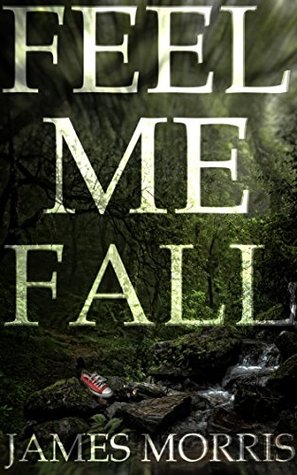 Emily Duran is the sole survivor of a plane crash that left her and her teenage friends stranded and alone in the jungles of the Amazon. Lost and losing hope, they struggle against the elements, and each other.

With their familiar pecking order no longer in place, a new order emerges, filled with power struggles, betrayals, secrets and lies.

Emily must explain why she’s the last left alive.

But can she carry the burden of the past?

Many thanks to James Morris for reaching out to me and providing my with a review copy of Feel Me Fall. The first book I read by James Morris was Melophobia in 2015 and I loved it. When James got in touch via email a few weeks ago I was first of all positively surprised because he had taken time to visit my blog and he saw that I was not accepting review requests so his email was a subtle call to action as much as it was a polite acknowledgement that it was entirely up to me. Secondly, I remembered that I had enjoyed Melophobia- the writing and the theme and I was excited to accept Feel Me Fall because I just knew that James was yet again going to deliver!

The nurse, staff, doctors, everyone; they all know me for one thing. The thing that will define me for the rest of my life. I am a survivor. The only survivor of Air Brazil, the plane that crashed into the Amazon jungle carrying 137 passengers; 37 of them students, teachers, and chaperones from Riverdale Academy High. I used to hear about plane crashes and wondered how the victims felt in the seconds before impact, wondered what it was like to know you were about to die. Now I know.

Feel Me Fall completely and utterly pulled me in from page one to the very end! I love it when I read books that I love. It’s the best feeling in the world. I’ve never been to 3D cinema (I know what it’s like though because I saw a 3D clip in a museum in London some years back) but I can say that I’ve now read a 3D book!

Before you sue me for false advertisement, let me explain what I mean by 3D book…

A solid foundation is the beginning of all good, lasting things. Amazon jungle, plane crash, young survivors- all of these elements full of so much potential. Without careful planning, research and execution it could fall over flat like an empty sack full of ‘anti climactic’. In the hands and mind of an experienced writer/author- it’s magic! Feel Me Fall is YA, and while there are some- very few- plot tools in the story which would categorize under ‘used and worn’- they had their place and they weren’t overpowering. <spoiler>The student/teacher relationship for example: yes, the story could have been without this little tidbit but without it, Emily’s development wouldn’t have been as meaningful.</spoiler> It is a YA novel, after all… There is bound to be some dramatics, but I liked them in this context, they had purpose.

The overall theme of Feel Me Fall is to observe the workings and limits of human psyche when put into a harsh environment where survival means everything right after a traumatic event. The group dynamics in between the survivors- who’s calling the shots? Does the past really matter when it’s time to stick together, even if it means rubbing shoulders with your bully? Will the actions and decision you make now to survive really matter in the future when you’re back in safety?

Delivered with a perfect flow Feel Me Fall alternates in between present and past- the contrast in between the two stark and meaningful.

Packed with methodically placed moments from flashbacks before the flight to life changing decisions of present, each of the characters’ personalities, pasts and futures unravelled in front of my eyes like 3D movie!

Each new revelation, twist, gruesome moment changed the direction of the story and made way for so many possibilities for the ending. All of the characters kept surprising me throughout the novel as I got to know them. Just as I thought things were starting to calm down, as I thought I had figured them out, as I thought there was a conclusion and an escape- BOOM! I was presented with a new scenario, a new feeling of ‘well, that changes things!‘

It’s a nice story. A nice story for a mother to hear, but unfortunately not true. That’s not the real story at all. The real story is much more complicated.

James Morris writes like a boss. Every emotion, breaking point, scene and environment was live in front of my eyes. Hence my 3D comment for this book. I was in the jungle, I was eating maggots, I was feeling despair, I was making excuses for survival, I was feeling dread for the future. I was in the river, I saw the bodies, I was on the plane, I was foraging for food, I felt the fragile camaraderie of the group. I felt paranoid, I didn’t know who to trust…

The writing in this book is clever, professional and obviously by an experienced hand. For someone who loves to read, this was one of the easiest reading experiences… when you don’t have to stumble for a sentence to make sense, when you don’t have to reach deep inside you to understand… Great balance in between how much is told and shown against how much is left for the reader to figure out on their own. For me, personally, this is one of those books that sets the bar.

James Morris has proved himself as a writer to me. Not only was I fully engrossed in Feel Me Fall, I can now see and ‘compare‘ this book to Melophobia. They’re different works, different themes and to be able to write so convincingly in both those different settings is a sign of an author you want to keep an eye on.

Look, I don’t ‘know‘ James Morris. Our communication has only been around: here’s a book- yes, please- here’s the review- thank you… I’m not saying all these things about the book(s) and author because I’m doing a personal favor. I’m saying those things because he and his books deserve it. You may disagree on my thoughts about the book- we all like different things, but this is my sincere opinion.

Feel Me Fall is a book I can easily recommend to everyone. Even when you’re tired of YA dramas, because it’s a whole lot more beefed up than your typical catfight plot around who’s sitting next to who during lunch hour. It’s a YA book, but 90% of it doesn’t feel like YA at all… it’s the harshest of conditions delivered with so much atmosphere, I may as well have witnessed a real event.

I noticed someone had mentioned that the ending of the book was a cliff hanger. Maybe in some warped way it could be a cliff hanger and leaves a door open to a sequel but I don’t think this kind of ‘milking of an event’ is this author’s style… I know this is a strong statement to make and I may well be wrong… but, this is just my opinion.  I felt like the ending, while leaving room for quite a lot of future happenings, fit just right. The loose ends were tied and what happens next is really not rocket science. It’s 50/50! It’s a moment of ‘I thought this was going to happen, but I didn’t believe it would‘ and at the same time, when all was said and done and the secrets were out, it made perfect sense. <spoiler>Never underestimate a strong, fighting spirit. Always take the words of a sole survivor with a pinch of salt because there is no one there to say otherwise!</spoiler>

So, when you read this book, your opinions and ideas of characters will be thrown for a loop but pay attention when those opinions shift, because this way the ending makes perfect sense and you won’t be left with a feeling of incompleteness.

33 thoughts on “Feel Me Fall by James Morris”