In a world where magic has disappeared, rival nations vie for power in a continent devastated by war.

When a young farm girl, Livia, demonstrates magical powers for the first time in a century there are many across the land that will kill to obtain her power. The Duke of Gothelm’s tallymen, the blood-soaked Qeltine Brotherhood, and cynical mercenary Josten Cade: all are searching for Livia and the power she wields.
But Livia finds that guardians can come from the most unlikely places… and that the old gods are returning to a world they abandoned.

*Many thanks to Titan Books for this marvellous review copy in exchange for an honest review.*

A Demon in Silver is 459 paperback pages of absolute fantasy goodness! Off to a really strong and exciting start, from ‘Oooh, this is hilarious’ and ‘Aaah, you bleedin’ bastard’ to ‘Noooo, this made me sad!’ A Demon in Silver took me on a wild ride.

Small human lives, in the mix of the old gods coming, and, again, that religious fanatic element that I always enjoy in a book. A 100 years have passed since magic disappeared- but why did it disappear and what happen and who was behind it? I tell you not, and instead leave the discovery of this fantastic world, with its history and present, for you to discover.

The story itself is one that holds within its history and present many changes, twists and turns whilst keeping that steady course towards an ominous culmination. A story, riding on top of the existence of a great and varied cast of characters who all, good or bad, stand tall within their own rights. And before the satisfying conclusion of this first instalment in the new series, there will be loyalty and cheating,  death and second chances, perilous journeys and questionable companions aplenty. My favorite- laughs, cursing and emotional turmoil were also present! 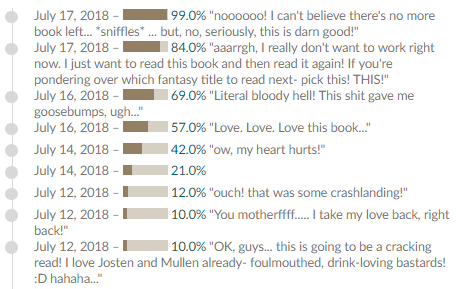 I feel like this book has so much to it…  I mean, it gave me SO much and without being a behemoth tome of gazillion pages. It’s 450-something pages and yet my experience with it left me sated in every possible sense. Every word, every scene, every setting was timely delivered through a prism of expertly chosen words and balanced out need-to-know whilst not discounting the all-important historical glimpse of events that took place a 100 or so years preceding the plot. Simply seamless! With clashes (deadly and otherwise) in between mercenaries, tallymen, a farm girl, a sword of the religious cult and a woman who is more than just a woman sounds ominous and busy, Ford’s crafty writing skill put it all into an order and presentation that never allowed my eyes to glaze over! Plus, let’s admit it, this eclectic mix of characters just made it go-boom, the possibilities, yo?! – in your head. Well, I hope it did anyway, you do not want to miss this fantasy title!

As is clear by my singing praises by now, I was completely engrossed, enjoying all of these characters for who they are and what they’re put through. Some met their deaths undeservedly, some quite deservedly…

Josten and Mullen, the mercenaries- definitely my favorite characters! These two won me over on page 2 and even though their shenanigans often gave me a near cardiac (due to laughter or fright) on pretty much every page, I don’t think I have ever taken a liking to 2 characters that quickly before. Now that I think of it- all of the characters introduced throughout the book had a big impact on me very, very quickly. I don’t know how Ford did it… magic? Mmmh… Or maybe the dialogue and expertly delivered scenes which allowed their personalities to shine from the get-go.

Livia, the farm girl in question, is a bright, level-headed young woman. Having never been further than the farmland boundaries she lives on, Livia abruptly finds herself in a very grim situation, a situation which she does not quite understand herself and as time passes she comes to know her strength… Livia is the loose constant, who left me wondering of her role in the big picture of things and as she found herself constantly facing the potentially last moment of her life, I was compelled by her purpose… But anyway, I found her storyline and development really strong in the sense that she really goes through a helluva lot and the way she deals with situations is nothing shy of admirable!

Silver, a mysterious character who appears to have fallen from the skies. A woman with unnatural physical strength, skills and power who is not to be messed with, yet who nevertheless demonstrates a heart full of love and kindness as slowly but surely her background is revealed. She, also, will be no stranger to new beginnings and difficult losses as she discovers herself and her own purpose in this story.

Kaleb! Blimey, this fella put me through some emotional paces! I do not wish to reveal his exact role in the book, but it is one of certain prominence and honour. I liked him, I didn’t like him, then I hated him and then I liked him again! With a conclusive overview of Kaleb’s life, it was very easy for me to understand him, and all the easier to dislike him for his decisions but what mattered to me is that he stood in his own right and I respect a character strong of will and skill. Kaleb is the kind of calm that you fear!

As all of the above-mentioned character and a handful of others come face to face, losses are counted and new alliances formed. It seems Livia is in the very centre of everyone’s attention. Some characters want her as a means to an end, some come to care for her in a way that demands loyalty. But Livia’s fate seems to be written in stone, so the question is can any man stop from happening what has already been set in motion?

The element of surprise! You really just don’t know what the next page is going to deliver! An unexpected change in direction, an unexpected alliance, death or loyalty made me change my perspectives and as many as there were chapters, I found myself teetering on the edge of madness- where was this all going to go? And who the feck can I actually trust? I was on the edge of my seat throughout and I LOVE when books do this to me- get me excited, exasperated, angry and anxious! Not to mention slightly horrified… there was a scene or two which made my hair stand but like a lunatic, I welcomed it, because this is the kind of fantasy I can get behind!

The consistency! Every one and every thing about this book is a carefully considered, necessary element, expertly transferred from Ford’s imaginative brain to paper for your very reading pleasure! The steady pace and progress of the story, the character development, the opening up of a new world in this new series- I seriously cannot wait for the next book!

The overall package! Characters, the plot, the background of the old gods, the Brotherhood. The clashing of loyalty and betrayal, the blood spilt in the name of gods, women and honour…  This is the epitome of fantasy! Peppered with wit and cursing, kindness and common sense as shown through the characters, it was truly marvellous for me to discover this new beginning and the absolute potential of more to come… I sure as hell am going to check out Ford’s other titles while I (im)patiently wait for the next book in War of the Archon’s series because man, I have been living under a rock and Ford is a new discovery of a gem to me!

A Demon in Silver on Goodreads ¦ Amazon UK ¦ USA